Three Tales from the Open Ocean at Manda Bay 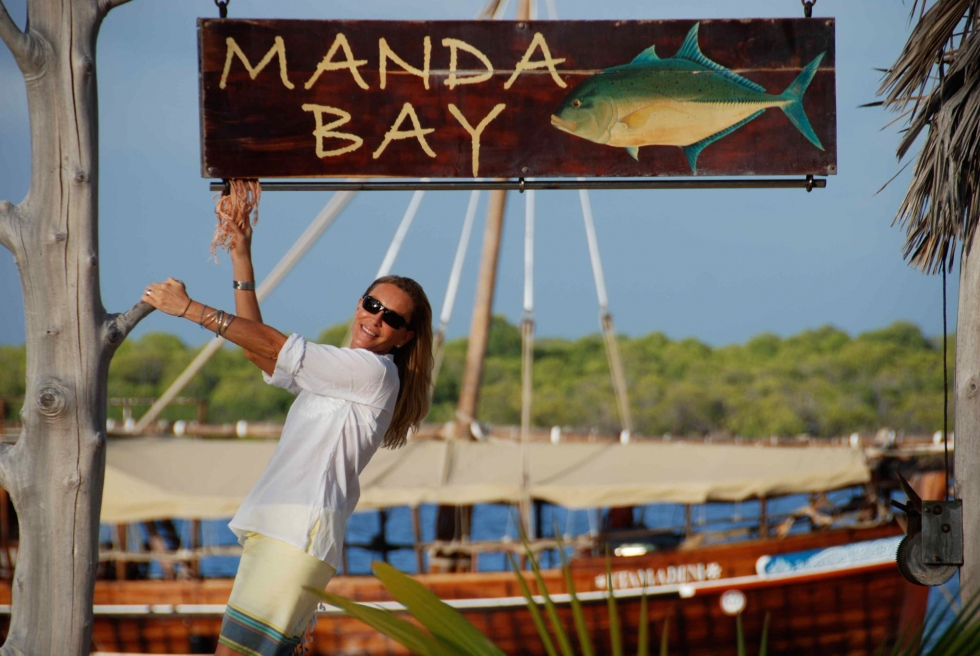 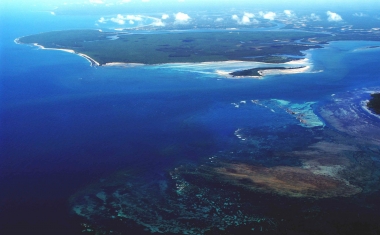 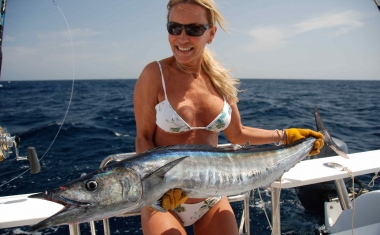 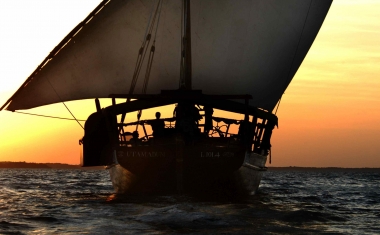 Sailfish - First time on a Fly? - Fishing Report onboard Shakina

It was a world apart from my previous experience of big game fishing. Gone were the usual array of lines, hooks, baits, rods, reels etc which typically trail out the back of a sport-fishing boat. The setup by comparison was blissfully simple. Two rods with teasers attached (no hooks) and one meaty looking fly rod with about seven yards of line pulled off the spool and ready for immediate action. Sailfish had been spotted leaping majestically on the horizon and our Captain Ed Ghaui was now plotting a course to intercept. Whilst he kept his focus on where the fish were mine was riveted on the wakes of the two teasers that fizzed along the surface about 50 yards behind the boat.

It was Gikuyu, one of the deckies who spotted the fish first. Standing around 6ft 4 inches tall he almost stood on a level with the bridge so he unquestionably had the height advantage. At this point his carefully pronounced English with which I had been receiving my instructions prior to this point evaporated and was replaced with machine gun Swahili. Moment later I saw a snaking wake and the tip of a fin behind the right hand teaser. On the bridge Ed was retaliating with Swahili counter-fire and in-between this barrage of instructions the elusive secondary wake edged closer to the bait. And then it was gone.

As I quickly discovered fly-fishing fly-fishing for Billfish is quite unlike regular big game fishing. The aim of the game once a fish has been enticed to look at a teaser is to ensure that it is pulled tantalisingly out of reach. Too far or too quickly and the fish will loose interest. Too slow and it will grab the teaser, realise that the tantalising morsel is hard acrylic and rubber skirt and the Sailfish or Marlin will disappear into the ocean as quickly as it appeared. This is not a sport where you lie in the sun with a drink waiting to be handed a rod. This is 100% all hands on deck! It does not mean that there will not be periods of inactivity during the day however when the sport comes it comes very fast.

The second opportunity came out of nowhere. On this occasion the Sailfish came straight up and grabbed the teaser before anyone had a chance to react. It quickly released it, momentarily disappeared and then as before reappeared, but this time tracking just behind the second bait. Once again there was a crescendo of instructions which rattled between the bridge and deck, growing in pitch and volume with each crank of the reel on the Teaser rods. I leapt into my fly-launching position scattering sandwiches and water bottles in all directions. The game of cat and mouse was back on. The game of cat and mouse was back on.

I would like to say that at all times I could tell where the fish was or indeed which was the wake of the fish as opposed to the teasers. It categorically is not that easy. However this fish was not in the mood to give up and with a final scream of conflicting instructions I launched my fly in a most ungainly cast; theoretically timed to land in the water at the exact moment and in the exact spot where the teaser was, prior to it being plucked out of reach of the chasing fish by the deckies. At the same time Ed cut the engines and all that was left was my pink fly in an oily looking slick of water. "Pop it, pop it!" Ed Shouted. I remain convinced that the collective weight of the teams searching stares simply squeezed the fish out of the water. With almost no disturbance a knife like bill scythed out of the water, a mere five yards from the back of the boat, and at the same moment I was almost jerked over the side. The rod jabbed erratically as I at first pulled into the fish and then somewhat desperately managed to flick the line clear of my hand. The reel instantly started to empty. Fifty yards away a fish soared into the air...a hundred yards away a fish soared into the air...and then it was all over as rapidly as it started. The line went slack and the whole boat let out a collective sigh.

It was probably too much to ask to land a Sailfish on a fly on my first outing. Having said that the adrenaline stayed with me for the rest of the day and the disappointment was eased by a fantastic booty of Wahoo, Tuna, Barracuda and Dorado caught by regular means. I would never of believed fishing could be as intense or as exciting as those few moments when it almost happened...I will just have to wait a bit longer until it does!

All in a days fishing

For someone who doesn’t get out on the Ocean Blue very often, I was kindly invited by the home team to go out on Shakina for a days fly-fishing. Since I was feeling rather envious of all the talk of sailfish by the dozen out there, I thought it was a perfect chance to try for my first sail on fly.

I had been elected to have the first attempt and had duly been given my instructions by Ed Ghaui (our Captain) on what to do. It was around 10am when Ed leapt up from his seat on the bridge and yelled "suli!" and I took to my rod and stood at the ready on the stern watching 2 sailfish chase up after the teasers. The deckies hauled in the teasers and at the right moment, Ed called ‘CAST’ and I duly flung my fly just behind the fish’s head. It immediately turned, saw it, opened its mouth wide and took it. I waited a second with anticipation as to what would happen next and then it torn off in the opposite direction with the line screaming out. "Wow – how’s that" it was such so amazing and seemingly clock-work easy. However, there was a bit of indecision about 100 meters down the line and the fish spat the fly out only to be taken by his friend. On this occasion, I kept winding hard until he was well and truly hooked. The excitement only increased as the fish took to the skies, leaping and bounding like a greyhound away from us. I have to say, it was just such an adrenaline rush. Getting a fish that size on a fly rod takes some time and although I was getting abuse from the wings and being told what to do to hurry it up, I took no notice and enjoyed every minute of my fight. He came in after 45-50 mins in great condition and what a sight to see those iridescent colours and his big eyes looking at you. What a pleasure to slip the hook and send him on his way...

If I could live for only one month of the year that month would be November- November is the month when the currents and the winds off the east coast of Africa change bringing clear warm water and calm days.

Lying in bed past 6.00 becomes a distant memory and sunrise is taken with a cup of coffee and the boat thrusting beneath ones feet whilst heading out to the fishing. This is sailfish season for us – when the currents and winds conspire to produce, for two short months, an abundance of sailfish unlike anywhere else. For me it is a combination of factors that make our fishing so special; Its wild in a way that only Africa can be – almost unheard of to have to share the fishing with other boats, the humpback whales are still migrating south, fish are everywhere - huge schools of yellow fin tuna and thousands of sailfish hunt in the shallow waters off the reefs, the beauty of the coastline, the bird colonies and the teaming game on the mainland to mention just a few.

To see a pair of crested terns working over a bait ball that has a pack of sailfish working below and knowing that in a moment you will be throwing a fly into the melee generates an unparalleled surge of adrenalin that causes even the steadiest of hands to shake. Fly fishing for billfish, when done properly, is an incredibly exhilarating form of fly fishing. There is a certain amount of team work required between anglers, crew and captain – first finding the fish, then enticing them to attack the hookless teasers which are trolled behind the boat. These are then retrieved by the crew, the boat taken out of gear whereupon the angler makes a reasonable (hopefully) presentation to what, for many, will be the biggest, fastest, hardest fighting fish they will ever encounter on a fly rod. There is plenty that can go wrong and plenty does go wrong in the course of days fishing for these amazing game fish – I look back at this seasons game book to see days when we raised as many as 45 sailfish and only managed to catch 3... (Losing 5 or 6 and casting at more than 15...)

Fortunately I get to spend the whole fishing season here on the north Kenya coast and so at the end of the main Sailfish run when we put our light tackle and fly rods away the excitement of unpacking the Marlin lures and heavy tackle for the big fish season that runs through until April keeps the adrenalin levels running high.

Capt Ed Ghaui helping out with a huge Wahoo