I had been warned that the Tarpon fishing off the coast of Costa Rica, where the mighty Rio Colorado enters the sea, was something to behold. I had also been warned by a confidant that he would never go back...not because of a lack of fish but rather, conversely, because it was simply too much. Over 3 days they had hooked around 30 monstrously huge Tarpon. By the time they left they were totally and utterly exhausted! Too many fish is never a bad sign when considering a exploratory trip and it did not take me long to find a side kick, Brett O Connor, with whom to see if the rumours would live up to expectations.

After a one-night stopover in a hotel in San Jose we were collected early the next morning, taken to one of the domestic airports amidst thunderous storm clouds and embarked on a 40-minute charter flight to the lodge airstrip. Within a short distance of San Jose all signs of civilisation disappear and you are quickly flying over thick jungle. Our first glimpse of the Colorado revealed an imposing murky coloured behemoth of a river. This was most certainly not going to be classic saltwater flats fishing! We touched down, not on a muddy jungle airstrip as expected, but rather on a vast concreted runway. Rumours of corrupt government land deals or CIA sponsored operation bases circulated, but our focus was on the river. It had been rising rapidly for the last 24 hrs and the local village appeared to be in danger of being washed out to sea.

None of these things seemed to perturb our guide Clifford who picked us up and drove us by boat the short five-minute trip upstream to Silver King lodge, dodging significant sized bits of jungle that were floating rapidly downstream. We arrived at the lodge in time for breakfast, a quick briefing and orientation before being reunited with Clifford and heading back out to the mouth of the River for our first morning’s fishing. The recent stormy weather with high rains and moderate wind meant that the river was running significantly higher than normal. With no definitive measure to gauge the river height it was really only when we came to the river mouth, the Barra del Colorado, that the conditions became more apparent. In order to reach the deeper coastal water we had to navigate past towering breakers, exacerbated by the floodwater and high seas on the ocean. This was an unquestionably exciting experience/white knuckle ride but Clifford wove our boat past the white-water with the sort of casual dexterity that comes with two decades of navigating these waters.

We kitted up with two 12-weight fly rods equipped with fast sinking lines and flies manufactured by the guides at the lodge. Regular Tarpon flies are redundant here. I do not mean that the patterns are ineffective but simply unless they are tied on the strongest hooks available the fight will be short-lived to say the least. Techniques will vary with the conditions, however with a reasonable breeze blowing we would cast out a reasonable length of line, let it sink and then work the fly as we drifted. It was difficult to know who was most surprised when the first fish took: however what is certain is that the take is extraordinarily vicious. Although I would normally expect to strike a Tarpon by pulling the rod sharply back two or three times, here it is enough simply to hold on tight. Whilst this might sound simple in practice the savagery of the take is terrifying. The overwhelming urge is to get your fingers as far away from your line as possible. Fish of this size and strength will do serious damage to any extremities inadvertently tangled in your slack line!

A typical yet colossal Tarpon leap during a double hook up

Brett was the first to encounter a fish, which like all Tarpon immediately showed itself with a staggering leap. Clifford gave a quick estimate of 150lbs and we settled into a war of strength and attrition. The Tarpon here are deceptive. Because more often than not they are hooked in water of a reasonable depth they very often play close to the boat. For the novice one might assume that an opportunity could present itself early on to land the fish; however a quick look at Clifford confirmed otherwise. His actions on hooking a fish were to tidy up the boat, reach to the cooler for a drink or two and sit back while the incumbent heaved, staggered and sweated with anticipation as well as effort. After around 25 minutes the fish scored the first points as the brand new 12-weight rod spectacularly disintegrated. With limited leverage the fish now exerted its authority and although Brett fought on for another 10 minutes with little control a final uncontrollable run resulted in an early release.

One thing you learn very quickly at Silver King lodge is that even though you may have lost the biggest fish of your life it is highly likely another one will be close on its tail. Thirty minutes later Brett was into another similarly sized fish. If we needed confirmation of the power of our adversaries we were about to receive another lesson. On this occasion his replacement 12 weight rod lasted a mere ten minutes before following an identical explosive fate. Two fish and two broken rods by the end of our first morning. We were going to need stronger gear!

It would be easy to cast negative assertions on the two rods, both from different makes, that had failed so spectacularly however this would be somewhat unfair. The Tarpon at Silver King are simply huge. This combined with the drift of the boat and the deep water means they often fight immediately below the boat, resulting in the angler having to apply enormous pressure on the fish with the rod at an almost 180 degree curve. We resorted to using the lodge rods -Abu Garcia Ugly Stick fly rods. These lacked any degree of finesse and were not what I would consider a suitable choice for a day’s casting on the flats, but they are unbelievably strong and robust...and that first and foremost is a pre-requisite for these Costa Rican giants.

The biggest Tarpon we landed- Estimated at around 170lb

Suitably equipped for the rest of our stay we proceeded to make better headway. On average we landed two fish/day on the fly and would jump, battle and lose about three times that amount. Our biggest fish was around 170lb, the smallest about 80lb and 120-150lb fish were considered normal. Some days we kept pace with those fishing conventional gear, however on occasion we were comprehensively outfished. On one occasion a neighbouring Silver King boat hooked three 200lb fish simultaneously, all of which they managed to bring to the boat before releasing them. It was quite common to see boats returning to the lodge early, their occupants totally exhausted. As a result your fishing gear has to be of an industrial strength. Weaknesses in rods, reels or line are brutally exposed. (As well as our two broken rods, by the end of our 3 days one of the flylines had been snapped whilst playing a fish and the other had been totally destroyed by the pressure of successive battles).

The fishing conditions are certainly not those of conventional flats fishing. To start with the Rio Colorado flows into the sea an almost impenetrable chocolate brown, regardless of the height of the river. Although this appears almost unfishable some of the best fishing can be had at the Barra del Colorado (mouth of the river). As Clifford explained, the coloured fresh water sits on top of the denser saltwater so beneath the discoloured top layer the water is in fact quite clear. This delineation between the fresh and saltwater is very visible beyond the mouth of the river where the water changes from brown to green and then further still the brackish water meets the cobalt blue saltwater.

On calm days it is possible to spot Tarpon breaking the surface in every direction as far as the eye can see. As a direct result of the enormous quantity of food washed into the ocean by the Colorado river and the ensuing proliferation of baitfish, the year round concentrations of Tarpon are without parallel and unlike any I have ever seen or heard of elsewhere. Should the exertion of catching too many big fish prove too much then it is also possible to catch Snook as well as a multitude of other species, both by the river mouth and further upriver, surrounded by the sights and sounds of the Amazonian jungle. There are seasonal variations in the numbers and size of the fish. September to November, when we visited, produces the largest Tarpon whilst April and May has the most settled conditions and greatest numbers of fish. Regardless of the time of year you visit, whether you fish with fly or gear, Silver King lodge is likely to produce more and larger Tarpon than any other destination I am aware of. This is reflected in the fact that most anglers typically stay for just three fishing days, as that is all that is sufficient to exhaust and sate completely all but the most feverish of fishermen. Of course this has its advantages, as just a short hop away on the western coast of Coast Rica are some of the most prolific Sailfish waters in the Caribbean.

...Sailfish on a fly anyone!

Other Reports from Costa Rica 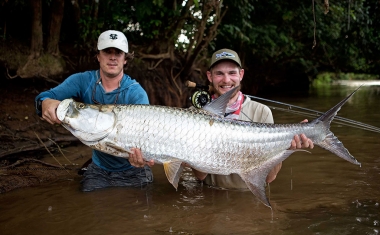 Tarpon and freshwater are not two terms that are usually associated with each other. But this is no mistake, huge Tarpon migrate far up the Costa Rican watershed creating a completely unique fishing environment for a very watery rumble in the jungle! ...