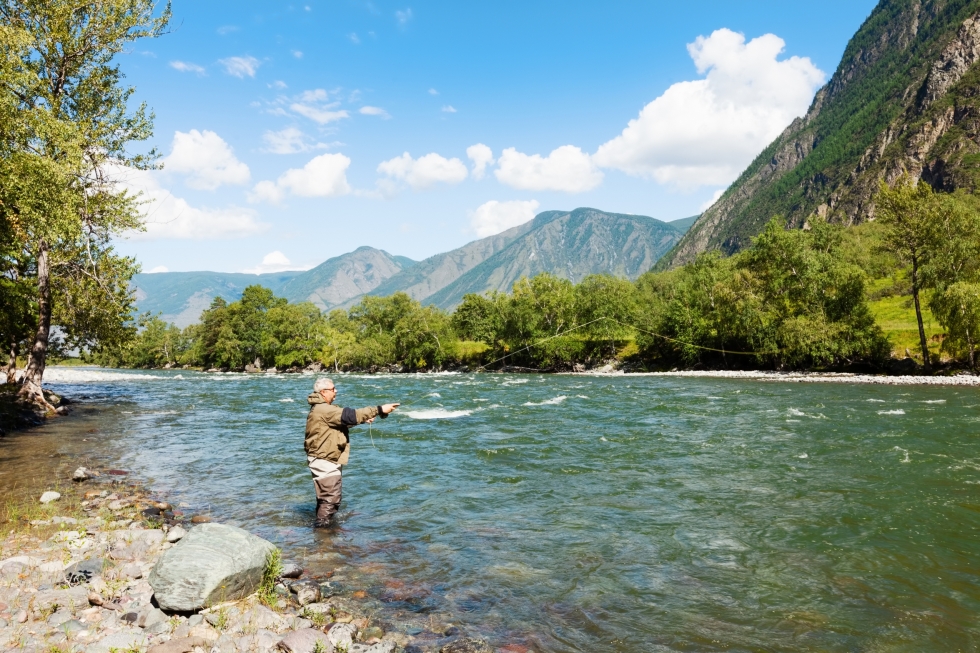 It may be that taking the mental step to make an overseas fishing trip is the biggest hurdle for most people. Having made the initial decision it would be nice to think that one simply picks out the appropriate week within your price range. At its simplest the cost of the week’s fishing will reflect the catch statistics both in terms of numbers, weight and to an extent how fresh the fish will be. Atlantic Salmon are, however, marvellously fickle. No matter how hard you try and predict the likely catches and conditions the reality is that to a fair degree luck will play a significant factor. To that end, providing there is availability, it becomes important that you know and are prepared for the likely conditions and fishing style you will expect.

The Salmon fishing season on the Kola Peninsula in Russia, compared to Scottish rivers, is very compact. It is typically not much more than 3½ months long. The benefit of this is that not only are the runs of Salmon more concentrated but it easier to predict the general conditions on any given week. Having said that, on the Kola Peninsula weather patterns change with astonishing regularity. Wintery-spring conditions can break into summer-like warmth from morning to afternoon and of course vice versa. The seasonal synopsis and tips below are based on personal experience on the Kharlovka and Litza Rivers which are situated on the Northern coastline of the Kola Peninsula in Russia.

The early season probably carries with it both the greatest risks and the greatest rewards. The surrounding tundra will have a significant covering of snow, the rivers will be extremely powerful and the water temperature wavering around the 3-5 degrees mark. These weeks do carry a certain amount of risk. On a late year the fish will not have filled the length of the river so the fishing will be concentrated around the lower sections. Conversely, if it is an early spring the conditions will be close to that on the prime weeks and you can have exceptional fishing. What is guaranteed is that all the fish will be tide fresh and the average weight will be close to 20lbs. The heavy water will mean that once a fish is hooked you can expect a monumental battle. During these weeks anglers can expect to be spooled by hard running fish heading at speed back for the ocean.

Early weeks are about being prepared and half the battle is about being well dressed. Thick thermals, multiple layers, gloves and woolly hats are essential. A range of medium to fast sinking lines are essential and the modern multi-tip shooting lines are a godsend for this type of fishing. Gone is the need to try and lift 40 yards of double taper sunken line with a large copper tube. Weight forward floating body shooting head lines, such as a Rio Skaggit line are custom designed to be able to cope with extremely fast sinking heads and very heavy flies.

These are the prime fishing weeks. Summer comes quickly in the Kola Peninsula and with a rise in air and water temperatures the Salmon will be flooding into the rivers during this period. The running fish of the early season will have filled all the pools from the main waterfalls on the Kharlovka & Litza and now the fish will be piling up from the top down. Good conditions at either of the falls pools during this period can result in some spectacular hauls of truly huge fish. The snow banks will be in full retreat and the scrubby birch trees which line the river banks will over a period of two to three days burst into life. Water levels will have dropped and the river will look much more manageable, pools appearing magically out of the faster stretches. During this period the Salmon will still be bright silver and will typically take a fly without hesitation.

Intermediate and/or floating lines are going to be the most popular methods and the fish will start to take flies fished on the surface. The weather will be no less unpredictable but on the days when the sun is shining it can be very warm. If there are any mozzies they will be very few and far between.

The last of the snow will have disappeared and the rivers will be dropping away to normal summer levels. On the Litza it is quite likely that the fish that initially filled the falls pool will have dropped back whilst on the Kharlovka the river will have dropped to a level where the Salmon can now jump the lower falls and make their way further upstream. Although large fresh fish will still be running there will be now be a higher proportion of grilse with the earlier running bigger fish settling into the best lies. These fish, having been in the river for a few weeks, will not take a fly as cleanly as before, however at the same time it can be the most exhilarating period of the year. Dry flies, Bombers, hitched, dead drifted or skated are the order of the day. The surface action can be simply phenomenal, even if it can at times be frustrating. It is common to raise a fish 2, 3, 4…6 times before getting some sort of hook hold…and if you do not hook it on the first series of passes it is very likely your fishing partner will sweep up behind you. Although catch numbers will start to drop off, the action anglers experience will be at its peak. It is a very exciting time to be on the rivers.

With the full onset of summer will come the mosquitoes and the reindeer. To have the later appear en masse and without warning whilst you are fishing in silence and solitude is a wondrous event. Rather like an approaching army you will first hear the rumble of the hooves followed shortly after by a scouting lead male and his accompanying herd.

Less majestic are of course the former! To the uninitiated they can be oppressive but do not worry. It is no coincidence that the reindeer migrate to the northern coast of the Kola Peninsula, as it is here the mozzies are the least numerous, kept in check by the onshore winds. Leave herbal remedies at home and on windless days ensure a regular application of a strong deet based insect repellent and your bites will be few and far between.

This is late-summer on the Kola Peninsula and although the rivers can get a rise of water at any stage they are likely to be at or around there lowest levels. It is the time to get creative and the ‘salmon stalkers’ out their will have a fantastic time. The low water conditions mean the fish will be spread all over the river holding both in the main lies but also seeking out tiny pockets of faster oxygenated water. Long powerful casts to cover the river’s width have had their day. Although the double-handed rod remains invaluable, most of the pools can be covered with a single. Clever wading followed by a trial-and-error assault using a multitude of different flies, ranging from heavy Snaeldas to size 14 micro flies will all produce results. When the take comes, even if it starts as the slightest sip, do not be surprised if you find yourself attached to a leviathan. The big cock Salmon will be getting territorial and aggressive and without the heavy water of the early season you will have a much higher chance of bringing one to the net.

This autumn period has seen the recent introduction of the limited helicopter and walking tundra weeks. Significantly more affordable and aimed at the young and adventurous, this opens up the beauties of the Kola Peninsula and all it has to offer to everyone.

It is the closing period of the season but in a sense it is also the beginning of the next season for it heralds the arrival of the Osenka Salmon. Typically weighing in the region of 15-25lbs Osenka Salmon are one of Mother Nature’s extraordinary natural mechanisms to ensure against any catastrophic disaster afflicting the main Salmon run. Carrying up to 30% more weight, these extremely powerful fish arrive in autumn in pristine condition. They will spend a full winter under the ice, re-emerging the next spring gunmetal silver before sitting out a full summer season and spawning the following autumn. Their arrival, combined with lowering water temperatures and a rise in the water, will act as a catalyst that will serve to shake up the more dormant fish and can result in a spectacular end to the season.

Cock Salmon with a huge kype: A real September Crocodile