Each lodge, destination and species of fish has its own characteristics and more typically one often arrives with a set of preconceptions of what to expect. The Royal Coachman, in the Bristol Bay region of Alaska, is a fly out lodge which offers a slice of everything. Absurdly good food, very comfortable accommodation and of course great fishing where you can catch every type of Pacific salmon, trout, grayling and pike.

It would however be fair to say that our group had their sights set on the King Salmon. Huge fish which have a reputation for hugging the bottom of the very deepest holes. Catchable on a fly, but only with the application of some serious heavy dredging gear. My preconceptions were about to be rocked!

Looking down from the cliff face in the ‘aquarium pool’ on the Kulukak, river you are treated to the sight of a pool so packed with salmon you can scarcely believe your eyes and amongst those scores of King Salmon ranging from 20 - 40lbs and over. At this point it is fair to say that I adopted my position overlooking the pool with the video camera about 3 hrs too late. Simon had previously fished the pool earlier that morning and battled with a fish conservatively estimated at over 45 inches in length. He had also annoyed, irritated and risen several other fish.

That did nothing to dilute the palpable excitement of watching a large and bright pink fly float over not one but several fish in the 30 lb range and some which were far in excess of that. With each cast the line was lengthened or shortened, cast squarer or given a larger mend to allow it to sink to the requisite depth, where it literally tickled the nose of the fish. More often than not the fish would sit impassively, however some would actively avoid the fly, some turn towards it and others chase it throughout its swing. Crucially however you could monitor every move of the fish, an attribute in salmon fishing that I thought was almost unique to the clear waters of Iceland. On this occasion, whether it was the early activity of a hooked 40lb fish racing around the pool or the bright sun, the Kings had stopped playing. It did nothing however to dilute the excitement of just watching the action beneath me.

This is most definitely sight fishing for salmon at its best. The fish are veritable behemoths and the water is as clear as you could ever hope for. Most importantly the pools are awash with fish. Just flying over rivers and the lakes each day is an enlightening experience. Quite apart from the occasional roaming bear or the generations-old beaver lodges and dams, which pocket the waterways, there are some incredible aquatic sights. Rivers that have been stained completely red by sockeye salmon in their spawning colours. Kings which sit impassively like huge logs, on their own or in smallish pods. Chum salmon congregating in there hundreds.

A 40 inch red king being returned on the Holitna

Of course it tends to be on the bright sunny days that you can see exactly what is going on in mouth-watering detail, even if it is at the expense of optimum fishing conditions. Equally, not all the rivers are crystal clear; however as the salmon adopt more colour they become increasingly easy to spot. On one of the other main King Salmon rivers we fished, the Holitna, even on totally overcast days it was still possible to spot, chase and cast to fish which were seriously large.

Once over the size fixation the variety on offer at a fly-out lodge such as the Royal Coachman is spectacular. Salmon of all descriptions in all environments and conditions can be enticed to a fly, whilst the scale of the wilderness around you are amongst is equally impressive. If helicopters are old hat to some, floatplanes may still be a novelty. Taking off down a winding river is definitely exciting stuff. The fact that sometimes there has to be a diplomatic weight distribution only adds to the thrill. This has to be taken into context considering what was generally agreed to be the best food any of the party had ever had at a fishing lodge, let alone most restaurants. All in all a remarkable place, situated in complete isolation from any other trace of human habitation, and one where, to a man, expectations were met.

No matter how excellent or how good a reputation a location or a lodge is, there will always be trips when things do not go according to plan!   Fishing is an unpredictable business, and the weather is as often as not the culprit.   For the 2022 season, WhereWiseMenFish had the final two weeks of the King ... 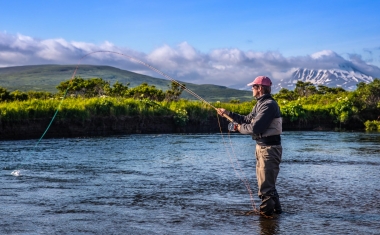 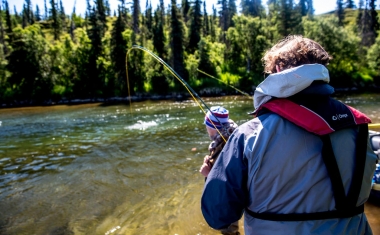 Alaska is a VAST wilderness. During much of the year it represents a tough and totally unforgiving environment, for nature as well as those who call it home and make their living here. It is also an area with quite incredible natural resources, of which the Salmon migration is one aspect that sustains, as well as bewilders, ... 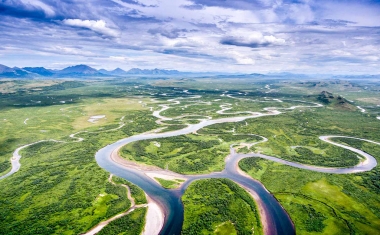 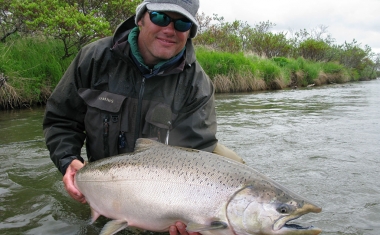