Justin Maxwell Stuart takes a closer look at the Gaula, Orkla and Namsen 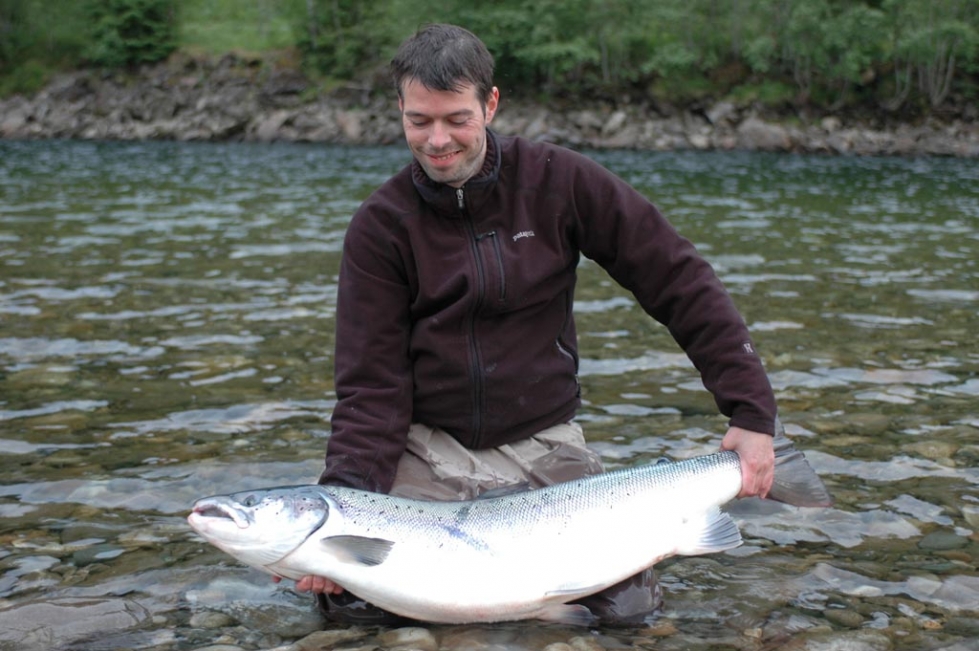 The great salmon rivers of Norway such as the Alta, Gaula, Namsen and Orkla were probably responsible for the earliest breed of travelling anglers. Primarily it was sportsmen from Great Britain who travelled to Norway in pursuit of the finest salmon fishing available. Not only were the numbers of fish high but maybe more importantly the salmon here obtained sizes that dwarfed even Georgina Ballantine’s record British rod caught fish of 64 lbs. These anglers were given the prestigious title of "Salmon Lords"; not so much a reflection on their nobility (although some of course would have been titled), but rather a term that reflected the noble means by which they conducted their pursuit with rod, line and fly.

In the mid 1800s British anglers travelled in relatively large numbers in pursuit of Norwegian leviathans and in the process they bought or obtained leases for many of the rivers. When the fortunes of many Norwegian rivers sadly declined interest shifted to previously inaccessible and untapped fishing such as Icelandic rivers or the Kola Peninsula in Russia.

The fate of Norway’s reputation as provider of the finest salmon fishing available was almost sealed by the introduction of Gyroglactis Salarius. This impossible sounding disease was inadvertently transmitted to Norwegian rivers by salmon taken from the Baltic Sea by the fish farming industry. These salmon, or rather the smolts which the disease attacks, had developed immunity from the disease. This was not the case with the salmon of the Norwegian rivers and the results were devastating. In total 46 rivers were infected with the disease and overnight Norway became the pariah of Atlantic Salmon fishing. Where once anglers returning from Norway were greeted with envy, now they are subjected to significant scrutiny and disinfection before being allowed to set foot in other rivers.

All that remained was a history of enormous fish and huge catches from years gone by. Fish so large that one could only wonder how they were tamed without today’s large disc brake equipped reels, chemically sharpened hooks and rods whose heritage was born more closely from the space race rather than humble and often unwieldy greenheart or cane rods.

Or so I thought! During 2007 I conducted a lightening recce around the rivers that feed into the Trondheim fjord, a straightforward two-hour flight from Stanstead. I found a very different story. The lodges and hotels still sport the cane rods and flies of yesteryear and leviathans still adorn the walls. However on closer inspection the dates of capture beneath some of these monsters tell a different story. The sizes are similar but the dates are recent. With Norwegian blood already running in my veins the time seemed right for a closer inspection. I took the opportunity to fish three of the finest, the Gaula, Orkla and Namsen Rivers over the three months of the season, June, July and August.

My first taster was on the Gaula River, fishing with the Norwegian Fly-Fishers Club. It was the 2nd week of June and providing the water is not too high one of the best times to come into contact with the seriously weighty MSW fish, that typically run the rivers during June. A downpour during the first evening and following morning turned the lower river chocolate but my guide informed me that the fabled ‘bridge pool’, which I was to fish the next morning, should not be missed regardless of conditions. He was right! Although the lower river can colour quickly, the upper stretches by Storen are fed by snowmelt from the mountains and although the river was high the water carried almost no trace of the colour prevalent on the lower beats. Optimism soared, but nothing compared to arriving at the pool to find an absolutely fresh 32lb fish being brought to the net, sea lice still twitching!

If that were not enough to convince me that at least the Gaula showed considerable promise, the next fisherman I bumped into sealed the deal. Fishing on the Bogen Sondre beat he had hooked an impossibly solid object which gave little indication that it was even animate. His line hummed taut as a wire as it disappeared into the deep clear stream. Equipped with the untarnished confidence instilled by a brand new 15ft Sage, Tibor Gulfstream reel, and with the words, “capable of stopping a locomotive” playing in his head, the fish woke up and headed for the ocean. Technology aside all that was left was to trust in felt soles and run helter skelter after the fish. Unfortunately, in such moments of intense adrenalin, balance is as important as speed, and in this case the latter got the better of the former resulting in a very painful gravity induced dive and a face of rock. In that split second as hands thrust forwards to protect against the fall the balance of control shifted very firmly from angler to fish. A heavy clatter followed as the rod and reel first bounced, scraped and then scythed into the water, hissing briefly and then disappearing into the fast current – fish and gear never to be seen again!

My next instalment was in late June on the Orkla. Late June can be a problematic time to fish in Norway. Although the season is in mid-flow, as often as not so is the summer, with the perennial problems of low water etc. Having scanned the weekly forecast to find a single days break in the predicted 30 C daily temperatures our team arrived with maybe a little trepidation. Although low the river was far from the paddling pool we had anticipated. The Orkla receives a generous amount of compensation water from the hydros, and whilst this is never the same as a good spate, it means that all the pools are extremely fishable. Critically, however, the compensation water is sourced from deep lakes high in the mountains and as a result remains reassuringly cool. Even after we had endured a full week of sun the water temperature was no higher than 14 C when many of the other rivers were approaching or exceeding 20 C.

A big fish on the line at the Bridge Pool on the Gaula.

Aunan lodge, where we were staying, is owned and run by Veggard Heggem, an exceptionally pro-active young man whose international football career was cut short by injury. His passion for the game still runs strong and even if the huge drop down projector in the main lodge is nominally for showing off the fabled 30 pounders, I think it is likely that sporting fixtures may also have been debuted once in a while! Although during our week we managed just over a dozen fish between our small party, given the conditions out tally was certainly respectable. The one thing with which we were all in agreement with was the fact that the pools were amongst some of the most appealing a fly-fisher could ever wish for.

Tom Holt casting into the trail of Igdholen Pool on the Orkla.

My final foray was to the Upper Namsen. This is another river steeped in big fish history. Although it was early August and the days remained absurdly sunny the authorities had just released more water from the hydro station and as a result the river, and more importantly the fish, were starting to breathe easy again. From a fishing perspective the crown jewel of all the Namsen beats is likely to be Fiskumfoss a huge natural waterfall. In fairness this is only the case in spring and during floods as the water is now utilised by a hydro dam and most of the water somewhat ingloriously now exits from a sluice at its base.

High water or low, hot or cold the pool at the base of the falls is a behemoth both in the numbers of salmon that hold there and the number that are caught from it. What makes it doubly exciting is the fact that midway down the left hand side one is faced with an un-navigable rocky impasse. Many anglers, and especially the more prudent, will seek to ascertain possible landing spots for a fish prior to going about the business of trying to hook them. In a pool such as this, once a fish reaches below a certain point the force of water means that it is simply impossible to tow the fish back upstream. This leaves only two options, one being to hang on for dear life and the other, if that fails, is to take a mental picture of what might have been, pull hard and wait for the line to snap or hook to give. There is however a sort of doomsday alternative, best illustrated by the tale passed on to me by the enigmatic owner of the fishing at Fiskumfoss, Jon Ivar Moe.

A few years ago a gentleman, standing at the mouth of the sluice outlet, hooked a fish of very considerable size. After a one-sided tug of war the fish turned its side and power-boated downstream. Now this particular angler was from Germany, a nation known for logical thinking and precision engineering. What happened next however would have made the maddest of mad Englishmen proud. With a rapidly emptying spool and sinking hopes he jerked hard on the cord of his inflatable life vest and hurled himself into the river. 40 minutes later, 2 kms downstream, the onset of hypothermia imminent, he pulled from the water a fish of 34lbs with a meaningful "never never again"!

Moments of such greatness do not come to all and during my travels they did not befall my rod and line. However, if I held doubts as to Norwegian salmon rivers they have certainly been allayed. Increased restrictions on netting have been put in place this season, as have limits on the numbers of fish anglers can kill. Although it would be fair to say that many Norwegians still fish for the freezer, the outlook is increasingly more positive with conservation high on the agenda.

The future for Norwegian rivers is therefore rosy and with good reason. A visit to almost any of the rivers in the Trondheim area, which include the Gaula, Namsen, Orkla, Stjordal, and Surna, places the fly angler in veritable fishing heaven. Some of the finest fly-water imaginable is available amidst some absolutely breathtaking mountainous backdrops. The Norwegian countryside is impossibly green and lush, whilst the farms and villages are as picturesque as they are well maintained. The rivers normally run clear from mountain streams whilst exuding a translucent blue green tinge, and on occasion there is a bright flash of silver from the deep powerful flank of a genuinely large fish that hints of opportunities that should not be missed.

Other Reports from Norway