Fishing so good the fish bite back! 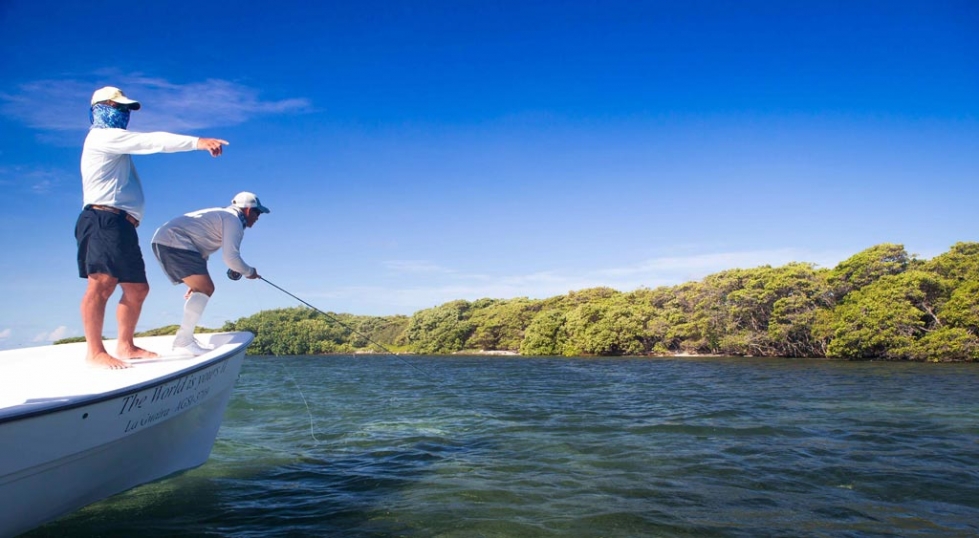 Saltwater fly fishing, whether it be for Bass off the coast of Donnegal or Marlin in the Indian Ocean, is as different from freshwater fishing as cane rods are from the modern high tech Carbon Graphite rods of today. The surge and power of salt-water species can give the unaccustomed angler a hedonistic taste for the sport in a way that a humble stocked Rainbow Trout can only aspire to emulate. The biggest challenge of all however is usually making that first leap which takes one from familiar turf to exotic tropical waters.

Like any keen angler I have developed a sixth sense for likely fishing opportunities. I had not however expected my radar to be activitated whilst on a visiting a police Station in Belfast. A chance meeting with an equally passionate individual, a spirited conversation later resulting in an exchanged telephone number and before I knew it I was heading out to Los Roques in Venezuela. Talk of Tarpon rolling under my feet, bonefish stripping line from reels, all under the Caribbean sun was all that was required to dispel my winter gloom with the closure of the Trout and Salmon seasons.

And so it was that a frantic month later I found myself drifting out of the clouds, in a plane that looked like it had seen service in WW2 - and probably had, in our descent over what can only be described as breathtakingly beautiful cobalt, turning aqua-marine coloured seas.

This dramatic spectrum of colour is on acount of the fact that Los Roques is an archipelago, rising out of the deep blue Caribbean sea and consisting of approximately 100 square miles of islands, keys and underwater mushroom like profusions, which I later discovered went by the name of pancake flats.

One hour after touchdown I was standing on the beach in shorts and shirt, armed with a bottle of beer and looking out to sea where laid out before me was most incredible profusion of marine and aquatic life. Immediately in front of me there appeared to be an impenetrable wall of minnows, 10 metres deep and stretching the length of the waterfront. In amongst these minnows Tarpon crashed, Bonefish cruised and Jacks plundered.

Above the air this mass of life was being attacked by phalanxes of Pelicans who would dive as one into the water and re-emerge with gullets overflowing with fish. In turn they were also being attacked by squadrons of Artic Turns who would hover and dance around the Pelicans, deftly stealing any protruding minnows from their beaks.

Just as I was trying to comprehend the scale of this maritime assault, my host and guide Justin Mcarthy reappeared brandishing a 7 wt rod and reel and armed with a ‘gummy minnow’, a silicone based ‘fly’ which appeared to mimic almost exactly the baitfish on offer. He pointed excitedly at a Pelican as it emerged from its underwater foray-“Did you see it-put on your polaroids”-“watch the next Pelican”. I did as instructed, opening up an underwater spectacle the like of which I had never seen before. As each bird surfaced and tried to make good its meal up to half a dozen Bonefish between 4 & 8lbs would jostle for position as they nimbly removed the minnows from the Pelicans beaks.

As a casting reference point to aim at the crash of a Pelican from 30ft in the air is a little less subtle than the gentle ripple of a rising Trout but this was my target and my mission was to place my ‘gummy’ at the feet of the surfacing bird. A few attempts later I achieved the cast as instructed and almost the moment the ‘gummy’ hit the water a ‘Bone’ emerged from the bottle green water, my line tightened and the next thing I knew the rod was bent over, the reel was in overdrive and my backing was hissing through the water. The tussle that followed saw me holding on for dear life, taking to the water, ducking self and rod under numerous anchor ropes and winding furiously. All of this was set to a growing audience of chattering children who looked on nonchalantly as they critiqued my performance.

On emerging triumphantly after a tooth and nail battle with a striking 5lb fish I paused for a moment to take stock of what had justb transpired and it was at this point that it occurred to me that I had not even unpacked my bags or clapped eyes on where I was staying. This was quite a change from my regular highland Salmoin fishing trips which could stretch days without even seeingb a fish.  To those who have yet to embrace saltwater fishing prepare your gear, your tackle and yourself for the strains and the excitement that you both will endure. Whilst my first few cast on the waterfront were an appetizer the main action takes place further afield. Most of the fishing is done by wading in ankle deep water, your eyes peeled for signs of activity above and below the water.  In the shallower water the ever so subtle protruding fin of a Bonefish replaces the crash of a diving Pelican.

To be successful you have to firstly detach yourself from your previous fly-fishing experiences and devote yourself whole heartedly to the instructions of your guide. With tutoring what initially seemed like a blind cast will become a casual nod of agreement as you and your guide simultaneously locate and target the fish. The consistent cast of a salmon angler or the well honed presentation of a trout fisherman will often be thrown into hectic disarray. A cruising torpedo in the shape of a Barracuda or the effervescent energy of a shoal of Tuna or Jacks, bursting into a feeding frenzy in front of you, will oft send your guide ducking for cover as you try to impart instant energy into your flyline.

To the experienced angler this is a place where you will be challenged to the utmost with both your stealth and skill being paramount. To a novice fisherman you will be rewarded with a visual spectacle that guarantees to satisfy all of your faculties whilst at the same time providing enough rod-bending action and adventure to ensure you never again look at fishing in the same light again.

Other Reports from Venezuela

My last trip to Los Roques archipelago was in March 2019.  Following the re-election of Maduro in mid 2018, the European Union, North America and a host of other countries refused to recognise the government and rumours swirled over a possible insurgency.  Russian military planes with troops had just landed at Caracas ...

As you approach Los Roques there is a palpable feeling of excitement by all those on the plane.  A small proportion of that might be attributable to the fact that ‘we had made it’!   Los Roques, an archipelago, a distant 100 miles from Venezuela has all but been forgotten by the angling community due ... 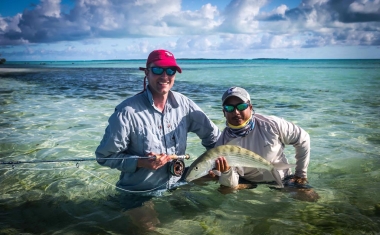 We touched down into Caracas on October 29th, the same day Hurricane Sandy made landfall on the Eastern Seaboard of the United States causing havoc, devastation and misery. The tail still had a sting as driving rain rocked the plane on its landing gear as we came to a halt opposite the terminal buildings. Mark Wengler, renowned ... 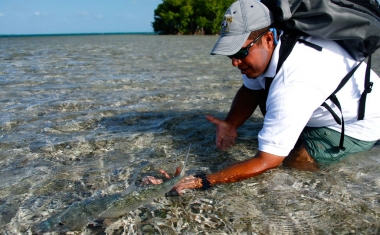 He goes by many names – Houdini fins, uptown sucker, John Mariggle – but to me the bonefish (albula vulpes, if you’re some kind of college professor) is the grey ghost of the flats. My favourite sporting quarry, I have chased him from Cuba to Christmas Island; but this year I found the finest place of ...