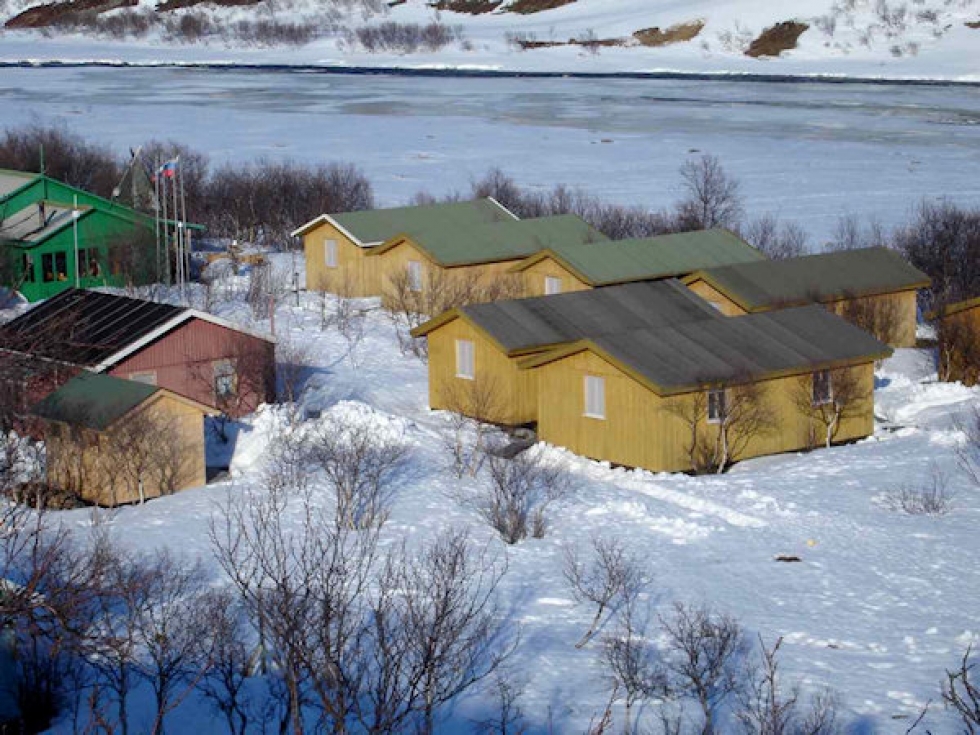 Following a winter of record setting conditions straight across the northern latitudes resulting in above average levels of snow and ice, not to mention the unseasonably cool spring that seemed reluctant to arrive further to the south, we were all a bit surprised to touch down in Murmansk last Saturday to the lush green state of the birch which was already in full leaf. In fact, the early spring arrival here to the Kola Peninsula even seemed to have an affect on the airport staff as we breezed straight through customs like they were actually glad to see all us crazy fishermen back again. Before we had time to settle into the fancy VIP lounge and order our second rounds, the pretty ladies in the airport were leading us out to the helicopter and waving us on our jolly way.

This season the mighty Kharlovka ice broke up on May 17th. Brought on by nearly a week of beautiful spring weather including several days with air temperatures above 25C (70 to 80 degrees F). The promising snow pack, which was some 20% above normal, was apparently no match for the freak spell of warm polar days. By May 23rd (one week before the start of the season) Volodya, our longtime director of operations who was on camp getting everything set up, was reporting the Kharlovka River to have reached its runoff peak - approximately one half meter higher than they could ever remember it before with a reading somewhere in the range of 160 to 170cm on the home pool scale. To give you some idea, the big rock at the top of the home pool was completely covered as were the last several steps on the way down stairs to the submerged lower helicopter pad below.

Oh what a difference a few days can make as the first eager Kharlovka guests of the season arrived into camp less than a week later to a river that had dropped down nearly one meter to a opening day level of 60cm on the home pool scale along with a promising river temperature of 3.8 degrees C. Not surprisingly, expectations were very high as the guests enjoyed the warm sunny opening weekend conditions pulling in 8 glorious salmon including a bright fresh 20 pounder that was covered in sea lice for Julian by Sunday dinner.

Unfortunately, cruel weather ensued with near freezing temperatures and 24 hours of constant rain driving the rivers back up again by 15cm. By the time we got them all dried off and thawed out, Patagonia force winds from the north made Tuesday a day to remember as three rods were broken just trying to get a line out. Thankfully conditions started to improve through the second half of the week and we finished up with a respectable total of 35 salmon with an average weight of 17.5 pounds. On the final day the Kharlovka was flowing at 68cm on the home pool scale (8cm higher than when we arrived) with a temperature of 5.4C.

Highlights from our long awaited opening week of the season must include Penry's first salmon ever that weighed in at an envious 17 pounds. Diego, our good friend from Switzerland, managed to find a couple of nice fish including his Litza 20 pounder along with another satisfying 22 pounder on the final day. Henrik had several entries in the fishing book however, his 21-pounder off the lower Kharlovka will be the one most remembered. John battled hard to the end before finding his 24-pound Kharlovka memory leaving him with a smile for the road. And then there was Dean, who had to be flown back into Murmansk for an ankle x-ray to start the week before finally coming back strong with his sprained foot to crank in his 25-pound sea liced Litza salmon in less than 10 minutes. It must be said that Dean thought his fish was simply another large kelt until he hauled it up to the surface with all his might. Upon seeing the big silver he decided to go for broke, doubling over the rod and sneaking it into the net before the great salmon really had a chance.

And let's not forget about the Super Swede Mikael who always seems to find big trouble wherever he goes. Along with a few 19, 20 and 24 and 29 pounders that successfully made it to the net, Mikael showed off his sprinting skills chasing after two unstoppable salmon. Unfortunately, both were eventually broken off using 45-pound nylon after several hundred-meter long runs. His Litza monster broke lose only meters before entering the Litza estuary - surely on its grand way straight back to the Barents Sea.

Although last week's notable fish were spread nicely amongst the gang, Big Dave was another one who seemed to have that magic touch. Making his mark early on good old Dave managed to find a silver brace of 20+ers including a 24-pound Litza salmon measuring in at 98cm and also that 21-pound sea liced beauty that was cleverly taken on his Parky's Persuader off the lower Kharlovka tide. Come Thursday evening it was clear that Dave was not messing about, as he limped back up the stairs with his camera in his hand reeling off the photos of three more weighing in at 19, 23 and 30 sea liced pounds.

Let's face it - Life would simply be boring without big salmon to hope for. Springtime in the arctic makes you feel alive. Bird chirping straight through the bright nights, the soothing sound of water running everywhere, air so fresh that you instantly take notice, a pure silence that makes you reconsider your priorities - Unless you have been here before, you probably have no idea how great it is to escape to Russia's far northern coast. See you all again next season! (And a couple of the lucky ones again in just a of few weeks..)