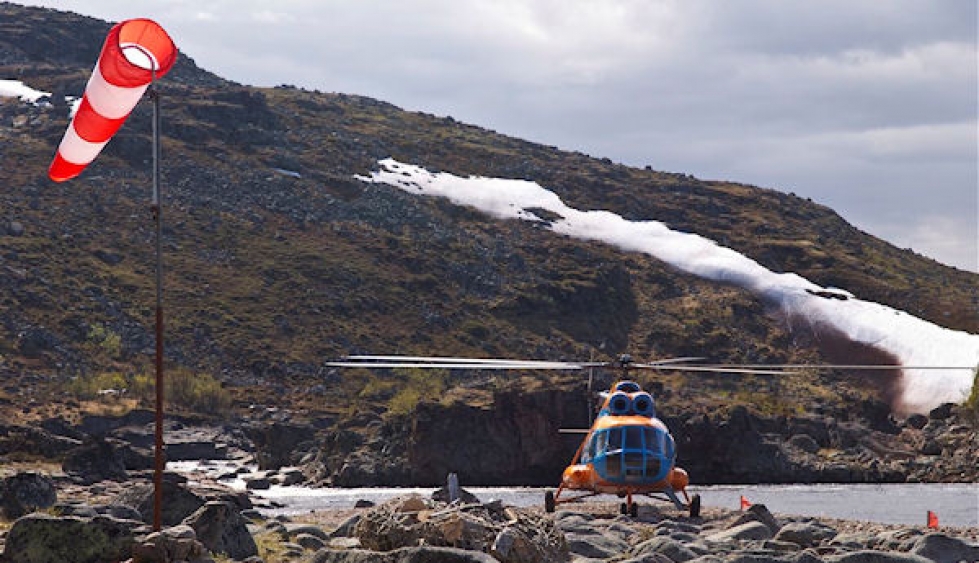 On the back of a rather cool blustery start to the season, we touched down in Murmansk last Saturday to bright sunny skies with warm temperatures in the mid twenties. For the third week on the trot, our eager guests have leap off the charter and took one good look around at the lush green forests thinking we have arrived back to paradise at precisely the right moment in time. However, before we could get them all calmed down in the VIP lounge, rumours along with their printed weather forecasts of yet another cold stormy week began to circulate the chatter. Lucky for them, it is impossible to predict what might happen next up here along the far northern coast.

Nobody seemed all that surprised come Sunday morning as they ventured out into the light rain mixed with snow flurries along with a low morning temperature of just two degrees C. Thankfully, what was supposed to be a week of cool nasty weather only ended up sticking around for the remainder of the day. Besides that one other morning downpour, which lasted just long enough to freshen up the lads, we enjoyed a beautiful week of mostly sunny skies with mild temperatures in the mid teens to low twenties and virtually no wind. Alleluia!

Let the good times roll – it’s prime time again on the great Northern Rivers! Although we finally received the extended spell of decent conditions that we have been praying for, the rivers still had a bit of catching up to do with the season. Normally (if there is such a word up here above the Arctic Circle) at this point, the salmon would be spread nicely through both the rivers, beginning to stack up from the falls pools down. Although the mighty Kharlovka River was in just such a state for the arrival of our latest guests, the cool mysterious waters of the Eastern Litza would still be a few days behind. While the vast majority of the silver was seen splashing its way by, it has to be said that consistent runs of large salmon were spotted coming through on the tides on both rivers straight through the week.

Last week’s highlights were big and plentiful with almost everyone in the gang locating that satisfying 20+ pounder. Dr. Richard will have plenty of stories to entertain the patients with when he gets back including his bright fresh 27 pounder off the treacherous right bank of the Home Pool. Even though David had a half dozen good salmon including a cracking 23 pounder on his Sun Ray Shadow, it will surely be the three other monster salmon that he broke off that will linger the longest in his memories. Karl’s hard work paid dividends in the end, as he will be returning with several fine photos of his 23, 24 and 26-pounders. Our good friend Mark certainly deserves a quick mention as well, landing well over a dozen nice fish including those six grand salmon that were 20 to 28 pounds. And we don’t call him Home Pool Fritz around here for nothing as our smiling German friend stayed true to form locating a couple of wonderfully fresh 27 and 30-pounders to keep his spirits up until we see him again next year.

Let’s not forget about Fast Eddie along with his partner in crime Alan either, as these two shot out of the blocks on the first evening and basically never looked back until they were completely knackered later in the week. It was reported that in between the dozen or so in the mid teens along with Fast Eddie’s stunning pair of 27 and 28-pounders, they were often caught power napping stretched out across the tundra in the late afternoon sun. One fine day, Alan woke up with a spectacular suntan and made the fatal mistake of flicking one last cast into the tail of the Snowbank pool. With the drag cranked up to full and the sound of the approaching chopper, Alan deserves a silver metal for landing his fresh 28 pounder in less than 10 minutes.

And God bless the Litza! For many of us, it is simply the best salmon river in the world! Although the super Swede Mikael most likely considered this flying into the lower Litza last Tuesday morning, he was about ready to get a reminder that he would never forget. With his friends and the guide watching on in envy from the opposite bank of the Military pool, Mikael blasted out his trusty Phatakorva tube far across the rapids. Swinging through the fast water near the top of the run, suddenly all hell broke loose and Mikael was hooked up with the Big one. Initially moving around the pool with easy, rubbing his 45-pound nylon on any boulder in its way, the great fish suddenly turned up stream into the fast moving water. Showing off his skills, Mikael held on tight for some 30 minutes while the mighty salmon fought hard against the heavy currents. Figuring his leader was nearly shot and with memories of the last two great salmon he broke off here only two weeks ago, Mikael finally managed to finesse his big silver prize into a calm pocket along the bank. Thankfully, after 18 previous visits here to the Northern Rivers, this veteran has learned that you never go anywhere up here without a camera! After a few hectic moments of realizing that he would not be able handle this great fish and operate his professional cameral gear by himself, then frantically trying to figure out where the self-timer button was on his little backup pocket job, Mikael somehow managed to hoist up his 118.5cm X 64cm – 42-pound sea liced salmon and smile for that all important shot. Not to brag, however over Mikael’s illustrious career, this was his 20th salmon greater than 40 pounds – Congratulations again! Click here to see his video.

Considering all the nice weather and good company up here last week, not to mention the 138 salmon that the team pulled together to catch, it was a shame to see it all end.

The long awaited signs of summer are suddenly all around us - Tiny flowers are sneaking up along the banks – stoneflies crawling across our waders – little brown birds singing for joy amongst the leafy birch – eagles and buzzards circling just above them on the afternoon breeze – the wolverine that went for a swim along the lower Kharlovka - the small brown bear waiting patiently down at the Barrel pool for the reindeer herds to arrive to the coast. With the rivers flowing nicely at 21cm on the Home pool scale along with perfect water temperatures of 10.9C, in addition to the substantial snowdrifts that still lie tucked away beneath the northern face, we should have another magical time here again next week.