Although only in my mid 30’s I have been an avid fisherman since childhood. During that time I have spent much time listening to older generations reminiscing about days gone by when our home rivers teemed with vast quantities of fish. My generation has, however for the better part seemed to have been blighted by tales that used to start with ‘it used to be’ and ended with ‘a shadow of its former glory’.

Yet one of the great things about anglers the world over is the ability to hold out hope that one day one will hit a river or a lake when all the conditions combine together to give a glimpse of what our forefathers tasted. And so it was that on a trip fishing for Steelhead in the spring of 2006, on the mighty Santa Cruz river in Southern Argentina, that I heard my first rumours of a destination so remote and so wild that maybe it was possible to experience fishing as it should be, undiluted by the hand of man. The tale that followed was an exploratory trip to a place where in one day three anglers caught 80 completely wild rainbow trout, all between six and 20 lbs, caught on conventional flies with conventional fly rods.

Even those who are not versed with the subtle art of the angle are aware that many a fishing story is subject to ‘significant’ elaboration. What was five pounds becomes five kilos and five fish touched becomes five fish on the bank. The tale above seemed to have been subject not just to an individual’s wishful thinking but rather successive generations of finely crafted tales each one better and bigger than the previous.

However, inquisitive as a cat I resolved to see for myself if this place was simply folklore or if a place really did exist where the fish took as readily as the greediest trout in the height of a mayfly hatch and if they really were flawlessly wild, silver as if they had run from the sea and some so fat they could only resemble rugby balls.

One year later from the small town of Piedra Buena near the mouth of the Santa Cruz River we embarked on our journey to Jurassic Lake. Now there is a reason behind most things and the reason why this lake had gone relatively unnoticed is because it is the route that takes you across some of the most barren wastelands on the planet. Gravel tracks make up five hours of the journey however after that you leave all trace of civilisation and jar and jolt your way over a desolate and seemingly unending lava field. The trip is punctuated by the occasional fox which stares at you incredulously and certainly fearlessly, wild ponies which roam carelessly amidst the scrub and even a huge hole gouged in the pancake flat terrain by what can only have been a meteor impact from another time. Anticipation is a powerful cure for life’s hardships and so despite the jolts time glided by and eventually we were confronted with a lake so blue that its appearance was akin to the deep blue of the Caribbean Sea.

With just an hour of light, as the sun dipped low and the sky took on a threatening fire red appearance, we cast our first flies. Prepared and eager I was first in the water. Second cast, my line hesitated and then… bang, a mighty silver trout broke the surface of the lake in a clatter of spray and an explosion of sound as my reel burst into song. The rod arched, my guide Pollo whooped, the others looked on incredulously and I suddenly started believing. My first fish fought in a manner that those who are used to catching oversized rainbows in trout farms can only dream of. Long searing runs and Tarponesque acrobatics. That fish probably weighed 12 lbs and by the time the others had got their lines in the water I was on my third fish and this must have weighed 20 lbs.

After that it was simply a matter of pursuing your favourite technique or style. We caught fish on size four cone head woolly buggers and size 14 nymphs. We used floating and intermediate lines. We fished dry flies in the small river that enters the lake where a single sudden move makes the water quite simply erupt as fish scatter in all directions. You can fish constantly until your arm aches or you can catch a couple, stand back and take stock of this truly incredible place and then jump straight back in where you started.

I should at this stage mention that the whole lake does not have quite the same concentrations of fish as where we were fishing. It would appear that the fish concentrate around the mouth and the lower reach of the river as they jostle for the opportunity to spawn. The quantities of fish however mean that they have developed their own unique spawning habits. Rather than spawning seasonally they do so throughout the year. Such is the competition they have developed their own unique ecology in this unique environment. Outside of their individual spawning cycle they roam the lake, which is absolutely crystal clear, gorging on a type of freshwater krill and growing fat to an extent that you have to see to imagine.

Is the fishing easy…..the answer is absurdly so. Do you have to be a proficient and skilled angler……simply the answer is a no. Would you want to spend more than a couple of days here……probably not. Is it one of the most unbelievably fishing experiences you are likely ever to come across, an adventure that makes the travel worth it and an insight into what happens when nature conspires to create perfect conditions for a particular species…..a resounding yes. It is Jurassic Lake!

Other Reports from Argentina

In short we had a great season with really good fishing from start to finish. There are always a couple days here and there during the season when fishing slows down for some reason, but this season, it always picked right back up after a short slump. We saw numbers of fish we have rarely, if ever during our 20 seasons, seen ...

About the only, almost imperciptible, positive effect of the dreaded Covid is that having escaped the clutches of government travel restrictions, pre-tests, post-tests, variant A-Z and weighed up the chances of imminent mortality vs an indefinite ‘stay at home’ incarceration, is that the proverbial carrot (in this ...

If ever there was a time to have an Audible talking book subscription, then I would suggest a trip to Argentina might be a good time to consider it.   There is no getting away from the size of Argentina and the lengthy journeys that are involved.  The domestic flight from Buenos Aires to Southern Patagonia is ... 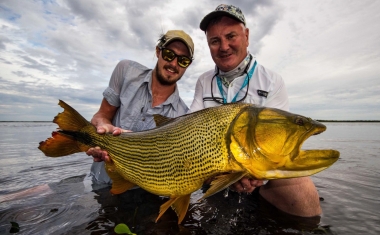 Pira Lodge in the Ibera Marshlands in Argentina was where “it all started”! It was the first dedicated lodge focused on catching Dorado and was the training ground for both many of the guides and experts who have taken that knowledge to other parts of South America. It was the lodge that put Dorado on the ... 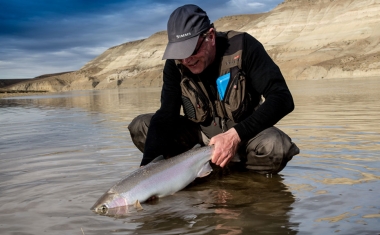 Organising fishing holidays may seem a little sedate compared to the experiences I had gained in almost a decade’s service in Her Majesty’s armed forces of the British army. That said, two or three weeks spent in Argentina every year was just about enough to satisfy at least some of my sense of adventure and the ... 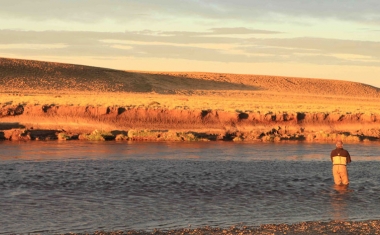 Following on from a week at Jurassic Lake, Lago Strobel with an outlandish tally of 1,100 Trout, in 6 days averaging 6-10lbs in weight Paul and his team of three head to the equally rewarding but infinitely more challenging Rio Gallegos River. ...