The iconic Grimsa Lodge and the very prolific waterfall pool below

Water levels were good, the weather over our three days reasonable, anticipation and enthusiasm was certainly not lacking, so what could go wrong!  As with most salmon fishing, the days when everything aligns perfectly are relatively rare. For the annual WhereWiseMenFish opening, over 27-30 June, we were treated to some especially cold conditions over the previous week. This was enough to slow down, what had otherwise been an encouraging start to the season, but thankfully not enough to prevent everyone having action, with more than a few fish lost and at the end of the 3 days of fishing, a reasonable tally of fish shared amongst the group.

The 'Bath Tub', the uppermost pool on Strengir on Beat 3 and the highest pool from which fish were caught over our stay.

The Grimsa season kicks off on the 17 June, one of the earlier rivers to open in Iceland, the Nordura being the first to open in Iceland on the 5 June.  This is despite the fact that the Nordura and the Grimsa join the larger Hvita almost immediately opposite each other (within a couple of hundred yards).  The Hvita is a glacial river with a subsequently milky flow and although a transit route for thousands of salmon, is not a river where salmon will spawn.  The Grimsa lodge is located approx. 7km upstream from its mouth, where the salmon meet a large waterfall.   That is the first natural and significant barrier that the Grimsa salmon encounter, and with cold water conditions, it does represent a barrier until the water temperature rises.

During the preceding week to our trip, night-time temperatures were dropping as low as 3C, and although the water was warmer, on our arrival for our first afternoon session there was relatively little activity to be seen below the waterfall. Consequently our first session resulted in blanks all round.  The following day, although a few fish were caught, the opportunities were relatively thin with almost all the action being confined to the pools below the lodge waterfall.

Heavily snow capped mountains in the distance, although very charismatic were not what you would normally expect to see at the end of June .

Our 2nd full days fishing was very different.  By now we had been treated to some weather which was feeling distinctly summery!  The water temperature had rocketed up to 17C and the salmon below the waterfall were showing constantly, along with significant numbers in the Canyon, immediately above.  The Grimsa has a full complement of 8 rods in total, and these are split into pairs amongst 4 beats.   The beats are not 100% fixed but are adapted to the fishing conditions on the arrival of each new fishing group.  Consequently, it was arranged with the lower 3 beats focusing on what were the most productive lower areas of the Grimsa, and these all yielded fish in increasing numbers over our 4 days of fishing (2 x 1/2 day sessions at the start and finish and 2 full days in the middle.

By the time of our final morning session on the 4th day the conditions were getting close to perfect and the salmon were now starting to really spread out in decent numbers, resulting in 8 salmon and 1 Sea trout being caught over that session, almost 50% of our total for the 3 days.  As I write this,  3 days after we left, 14 salmon were caught yesterday and the salmon have reached the uppermost pools on the Grimsa…if the sun had just decided to add its warmth a few days earlier!!!

Horrible Pool! Certainly not named on account of its appearance, as it is amongst the most scenic pools you could hope to fish, but on account of the fact that where the fish lie, if you are not very careful they will go down the next waterfall , which is, understandably, 'horrible'!!

There can be no doubt that the Grimsa is an incredibly charismatic and beautiful river.  The lower section is a series of primarily natural pools hewn out of the volcanic rock with numerous waterfalls and rapids.   These are pools that require a reasonable degree of river knowledge and stealth to fish effectively, all of which is readily provided by the guides.  With fast water, rapids, deep channels and waterfalls to navigate, working out how to present your fly is key to success. In addition to the natural pools there are a number of 'new' man-made pools to help hold the fish.  These well thought out additions have created valuable additional holding areas, especially in the upper section of the Grimsa.

Paul with a bar of silver from the 'crocodile', the rocky ledge below the waterfall and below which the salmon stack up in huge numbers.

Almost none of the pools on the Grimsa reward a long cast.  A light single-handed rod with a floating line, even in the relatively high water that we had is all that is needed to effectively cover the salmon lies.   Having a good and varied selection of flies is also important, primarily sized size 12 or smaller and including hitched tubes, sunrays, small tungsten coneheads, lightly dressed doubles and trebles and some micro trebles in size 16 & 18.  When you are confident that you are covering fish, working through your flybox will produce results, as although your first run may find a wiling taker, there are usually others that require an added level of coercion.  With added fishing pressure on the lower sections of the river it will typically not be long before the salmon in the regular lies have seen a Black or Red Francis a dozen or more times.  Having a few different surprises in your arsenal is always useful.

The author trying his luck, successfully as it happened as I hooked a salmon one cast later!

If there was one style of fishing that we missed out on over this trip was on account of the unwillingness of the salmon to come to a hitch.   This again will have been a result of the initially cold conditions and it was only on the final session that a few were starting to move to a hitched fly, one of the most exciting ways of enticing a salmon to take, and a key technique to master when fishing in Iceland and indeed for Atlantic salmon almost anywhere.

The Grimsa lodge is unquestionably one of the most iconic fishing lodges that you will encounter in Iceland.  It’s imposing form can look modernist in style however it is only when viewed from afar that one can appreciate how it blends into the surroundings, mirroring the topography and architechturally designed by a very passionate angler from the US who fell in love with the Grimsa.   From the dining room and sitting area anglers are afforded a fantastic view onto the waterfall pool, the Laxfoss (meaning salmon waterfall and therefore generically used across Icelandic salmon rivers).  If the lodge looks imposing in size it is for good reason. It has 16 bedrooms allowing almost all staying to each have a single ensuite room, even when sharing a rod.

Hideko, casting with a degree of reservation from the cliff-top, into the upper section of the waterfall, which resulted in an early running Sea Trout which were surprisingly plentiful, making up almost a quarter of our total catch.

Our total for the 3 days fishing was 14 Salmon and 5 Sea Trout.  Timing is everything when fishing and we were to an extent unlucky by the slimmest margin of a couple of days with the cold weather and the resulting reluctance of the salmon to run the upper sections of the river. (Although it is always tempting to think that a week later would be the better time to go, it should be noted that the rate almost doubles as you go into mid-July).  Amongst our team of 8 rods, only 3 of us had fished in Iceland before, myself being the only one with time under my belt fishing the Grimsa.

Knowledge and experience, especially when it comes to Icelandic fishing techniques, will always count and should not be under-estimated when it comes to the final scorecard.  Regardless of the level of success we had as a group, everyone came away far more informed and all with valuable skills to put to good use in Iceland or elsewhere.   A fishing trip should always be about more than numbers and the Grimsa always delivers a superlative experience in terms of the surroundings, guiding, the lodging and the exceptional food served to us each day.

A nice Sea Trout from the uppermost pool on Strengir 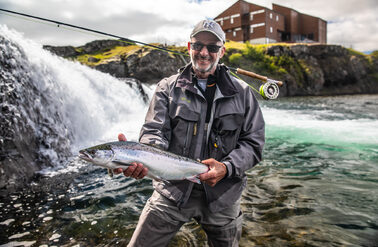 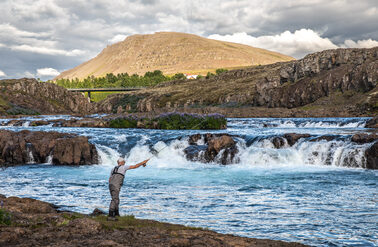 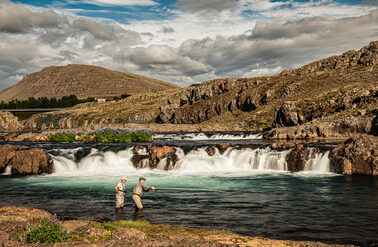 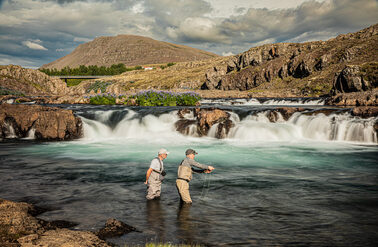 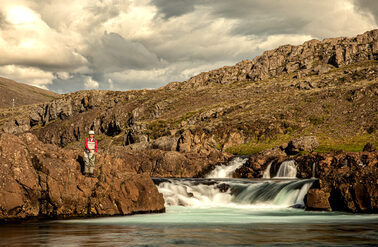 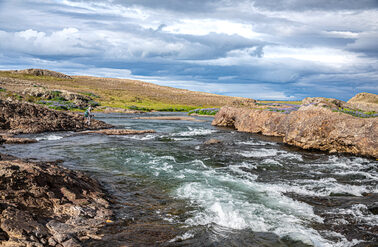 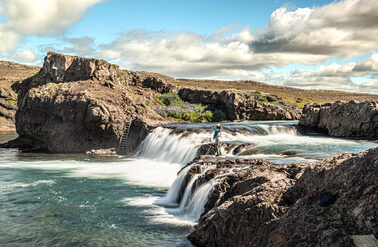 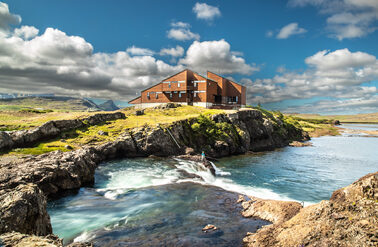 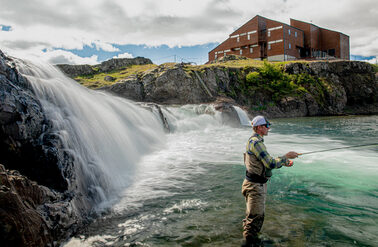 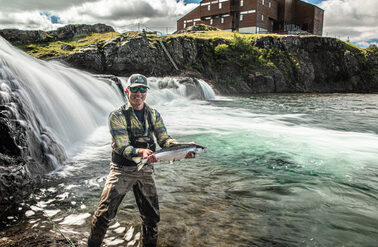 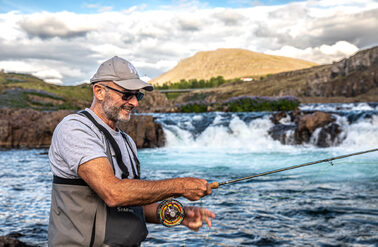 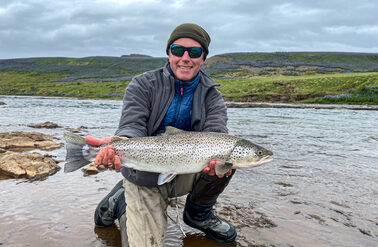 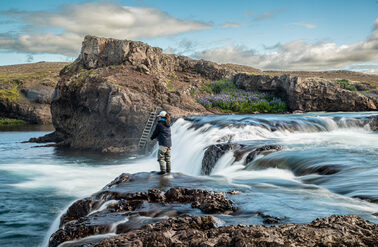 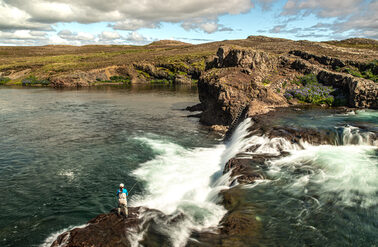 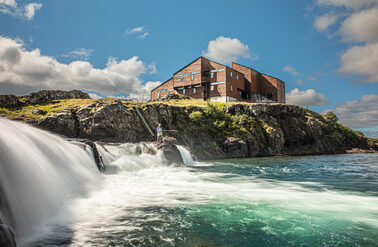 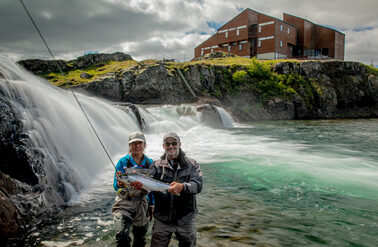 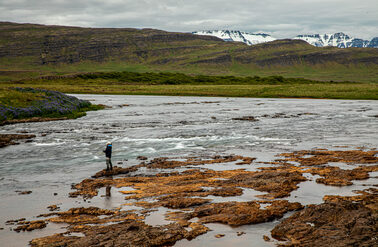 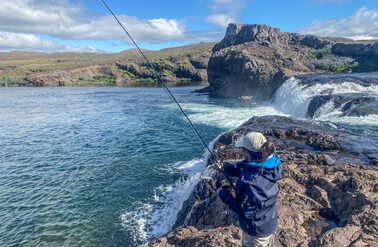 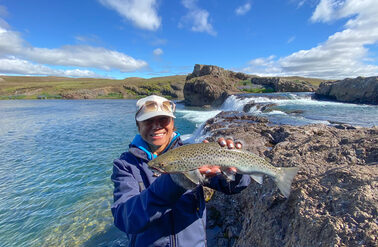 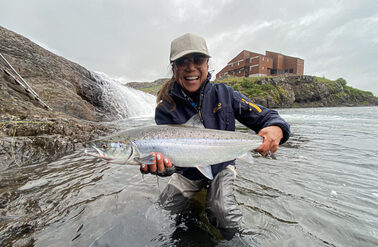 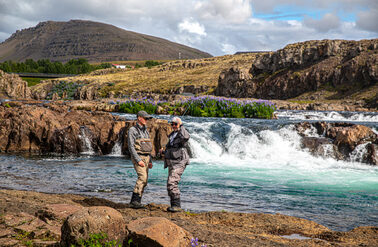 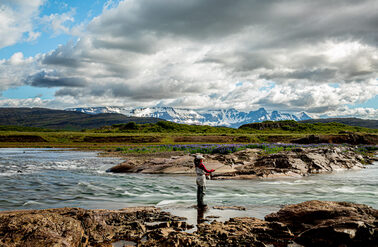 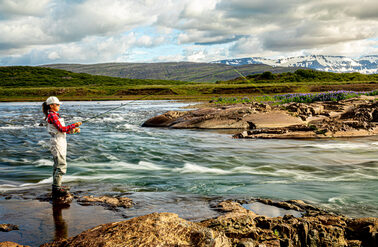 Other Reports from Iceland 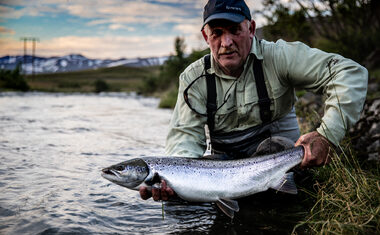 We all know how challenging any overseas fishing has been this year, but the four of us were determined to make the best of it and with Justin’s guidance and our enthusiasm, what could possibly go wrong!  Steve, Ed, Alistair and Justin therefore committed to a short notice trip to Northern Iceland to fish the ... 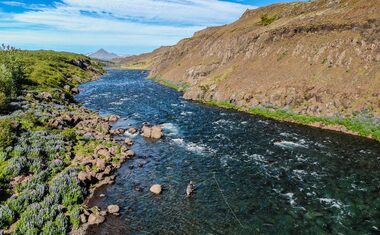 Iceland, throughout the last 15 months has been one of the very few beacons of opportunity, for what has otherwise been another miserable year for travel.  Although various entrance requirements were in place crucially there was no quarantine or self-isolation on return.  What was needed was  a double vaccination ... 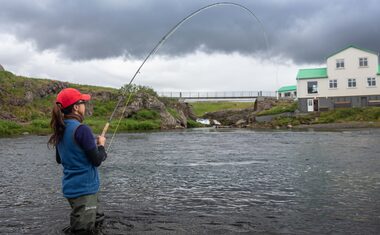 C-19 has hit overseas fishing destinations with the same sort of abrupt finality of the entirely unexpected landslide that severed the mainstream of the Hitara in July 2018.  On the night of 7th July an estimated 10-30 million cubic meters of rock cascaded down Fagraskogarfjall mountain covering an area of 1.5 square kms ... 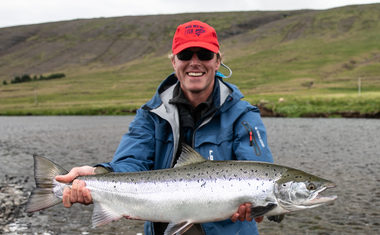 The early reports were not encouraging.  The West of Iceland had been suffering the worst early season drought that most river managers could remember.   There had been no rain for 4 weeks, unheard of over late May and June in Iceland.   Some rivers, without the benefit of a steady supply from large upland lakes ... 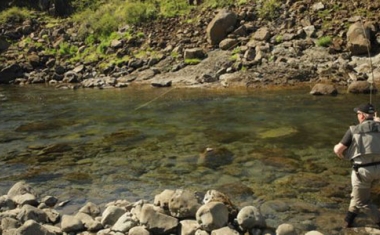 I first fished in Iceland in 2007. We were to fish a small river on the Northern coastline called the Fljota, which, common to almost all Icelandic Rivers, flows with water that is incredibly clear. This would necessitate the use of flies far smaller than one would normally expect to use whilst salmon fishing in almost any ...