Ask most anglers about saltwater fly-fishing, and chances are, they’ll start talking about bonefish. These sleek, silvery speedsters are the quintessential saltwater quarry, and the fish that got the whole thing started back in 1924, when Holmes Allen caught the first bonefish on fly.

I’ve got a bit of an admission to make. I’m ashamed to say that I’ve allowed myself to become a bit of a snob. On my first trip, to Cuba’s prolific waters back in 2000, I caught about a million bonefish, relentlessly obliging little fish mainly weighing between three and four pounds that queued up to eat my fly. I had a few nice fish up to a little over seven pounds, but after the initial exhilaration of the first successful day, I found myself asking, "Well, I’ve done that… what’s all the fuss about?"

Since then, I’ve done a fair bit of saltwater fly-fishing, and I’ve tangled with a wide array of bigger, nastier fish, including huge, high-flying tarpon, big and frighteningly savage barracuda, impossibly cunning permit and those hair-raising berserkers of the indo-pacific oceans, the giant trevally. When I hear all those wide-eyed novices at the Gamefair or the Farlows Christmas party, gabbling on about their amazing bonefishing trip, I’ve sometimes had to stifle a smug yawn or wipe a bit of a smirk off of my face. Bonefish are great, of course, but catching them in the meccas of Cuba, Venezuela, Mexico and the Seychelles can be almost embarrassingly easy, and, once the basics are mastered, the fishing can almost verge on the monotonous. Once you’ve seen a 75 pound yellowfin tuna empty half a kilometre of backing off of your reel in little more time it takes to write this sentence, your average bonefish can seem, well, just a little pedestrian.

Here’s how blasé I became: fishing the wild waters of Cosmoledo in the far western Seychelles, our group was advised to carry a twelve weight for Giant Trevally and an eight weight for Bonefish. After two days, I decided to eschew the eight weight and carry two twelve’s in case of inevitable trevally-induced breakages – bonefish were, I pronounced, to the amusement of my guide, "strictly for girls."

This year, having been relentlessly goaded for my blinkered view, my good pal, Tim Marks, finally cajoled me into doing some "serious" bone-fishing. Tim, is an excellent and hugely knowledgeable angler and someone who’s judgement I trust. Tim loves his bonefishing and positively bristles when I snort derisively at his beloved prey. He told me that I really needed to catch a "proper" one before I wrote bonefish off for good. And a "proper one", in Tim’s book, is a ten pounder. "Where should I go?" I asked, feigning a weary contrition. Tim had no hesitation: "the Bahamas." He couldn’t resist a final barb: "You just haven’t really even BEEN bonefishing until you go there"

I spent my first four days fishing at Tiamo Resort, a delightful eco-lodge on the southern bight of Andros. Tiamo has access to stunning bonefish water right on its doorstep, while just around the corner is the legendary “west side” of Andros, an endless expanse of gleaming flats that would take a lifetime to explore and an area reputed to harbour some truly enormous bonefish.

On arrival, I was greeted by Bill Warburg, the Lodge’s hugely likeable proprietor and a big, warm bear of a man. Fly-fishing is a small world indeed, and it turned out that Bill and I have fished some of the very same far-flung corners of the world. Over a bottle or two of fine red wine, we chatted long into the night about the merits of the mighty Kharlovka in Northern Russia, and Bill’s infectious enthusiasm for the fishing around Tiamo left me in no doubt that the huge bonefish of Andros represented a serious and extremely worthwhile challenge.

After a huge job back home photographing a relentless army of snivelling babies for an advertising campaign, I was exhausted, and Tiamo’s informal but luxurious charm was a real tonic. I stumbled down the beach in the moonlight to my room and found, to my delight that Tiamo offers not only world-class bone-fishing, but also just about the most comfortable beds I’ve ever come across. Furnished with crisp white linen, they are capable of relieving you of all the aches and pains of a long fortnight’s hard work, not to mention the rigours of a long-haul flight, in a single night. The resort can also boast all sorts of pampering, massages and suchlike for your non-fishing partner, and enjoying an icy cocktail, excellent cuisine and the easy ambience of the lodge after a long day prowling the flats is a real pleasure. Everything looked set for a fabulous few days

There was just one problem – the weather.

On my first morning, I awoke to savagely gusting winds and heavy rain-clouds. Bonefishing relies on spotting your quarry before he spots you, and as such, wet grey and windy weather makes things all but impossible. Any thoughts of heading out to the hallowed waters of the west side were utterly dashed – the prevailing north-westerly would have churned the flats up into an opaque, milky mess – and we were obliged to stay closer to home. Darren, my excellent guide, did his level best to find us a sheltered spot and finally we managed to catch a few fish, despite the desperate conditions. The fish were handsome: exquisite, mirror-silvered and magical, and of an excellent average size, but they weren’t what I’d come for. The huge black-backed, double-digit bones that I’d heard about, the fish that had drawn me to Andros, were notable by their absence.

For four days, the weather remained sullen and disobliging – each morning, I’d stumble blearily to my window to witness the deflating sight of a flat, leaden sky and foaming, angry waves slapping onto the beach. Somehow, mainly down to my excellent and tenacious guides, I managed twenty decent fish, but nothing over 6 pounds.

On my last day, I fished with Marvin Miller, the lodge’s head guide and an extremely well respected fly-fishing authority on Andros. I explained to Marvin that I’d caught a fair few fish despite the torrid conditions, but I really wanted to have a shot at some of the monsters for which Andros is famous.

Marvin knew just where to go – we ambled across a deep cut, and suddenly we were poling onto a dreamy golden flat adjacent to Linda Key. The wind had momentarily dropped, and the sun made a fleeting appearance, lighting up the stunning water. Almost as quickly as I could get up front and unhook the fly from its keeper ring, a school of big bonefish came cruising into the shallows. I lengthened the line and then Marvin was hollering to look left – nine o’ clock, 200 feet. I spun round and saw two enormous, eye-popping bonefish, goliaths that would have surely weighed well into the teens. As they came towards us, I made a decent cast, and watched with baited breath as the larger fish came close. As I twitched the fly, the fish seemed to pounce on it. I gave a short, hard strip-strike and felt…nothing. The fish bumbled off and despite a second cast that put the fly right in his path, I had to watch the huge black shape cruise tantalisingly away, unconcerned and hugely disinterested by any further attempts to ensnare him.

Alas, it was a glimpse of what might have been. The wind got up and the clouds came rolling back, and our chance was gone: Marvin and I never had another shot at the huge bones of Linda Key.

I left Tiamo hugely frustrated – the lodge was fabulously situated, and the South Bight was clearly capable of producing enormous bonefish, but the wretched weather had conspired to prevent me from having a fair crack at them. I vowed to return.

Other Reports from Bahamas 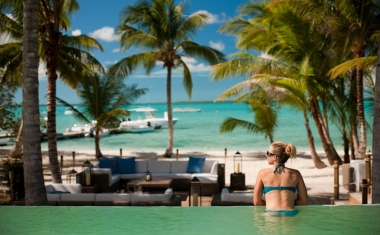 Bonefish in The Bahamas

The great thing about the Bahamas is that on suggesting a fishing trip to one’s better half (providing of course that ‘she’ is invited) you stand a very good chance of receiving clearance to go. Not that tropical bribery is or should be a necessary prerequisite for a fishing trip, but it undeniably has a ...