An Exceptional Week in August 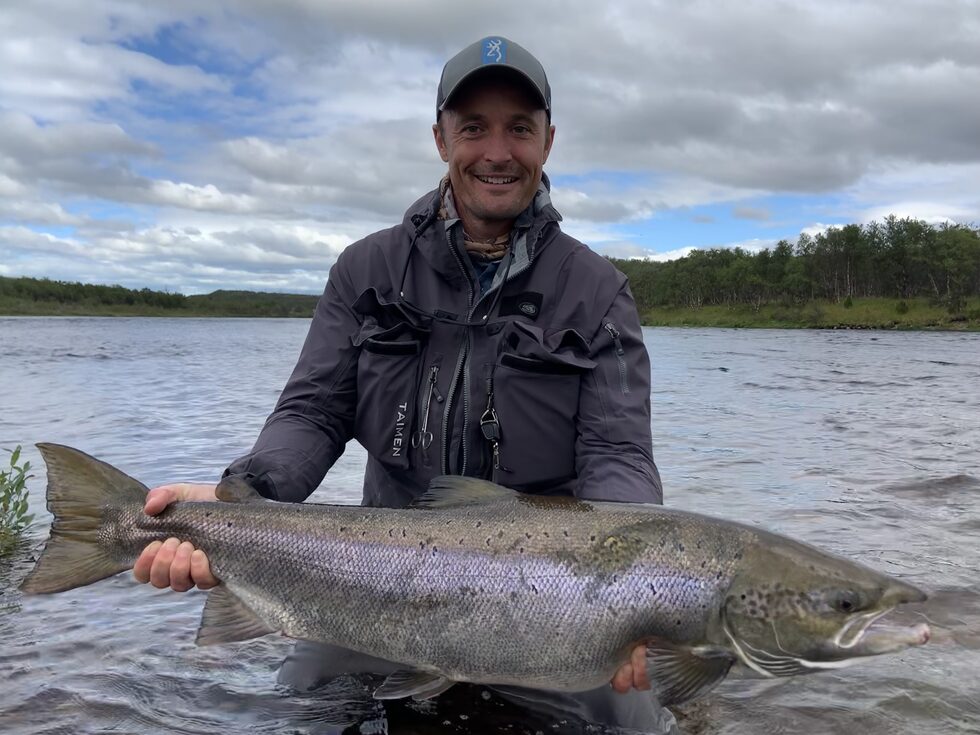 To those interested in fishing the Voronya and Belousiha with Justin, here are a few notes from my trip to Belousiha River Lodge in the first week of August 2021.

Firstly, once in Russia, it is far less of a rogue state than our press would have you believe. All of the signs and announcements in the airport are in English, and besides a few bizarre inspections of passports with monocles it is a very modern airport to rival the rest of the world. Getting the visa takes some planning but they were very helpful in the visa office- it is cheaper the earlier you do it, and make sure that you have the invite from the lodge AND the confirmation, and note it is around £120-180 for a visa from Russia.

The drive from Murmansk to the lodge is about 2.5 hours on mostly dirt roads, and not very attractive due to all the rusting pylons taking electricity back to Murmansk from Voronya’s hydro. A good time to catch some kip. The lodge itself is spread across quite a large area overlooking the Belousiha, and below a cold war radar tower and bunker used as a locater by their nuclear subs- think Goldeneye!

The staff at the lodge couldn’t be nicer- Max speaks good English and as well as being a great guide is the main point of contact for everything else. The rest of them try hard with their English and make up for any lack of vocab with large smiles. The huts are perfectly adequate with 2 single beds and a wardrobe and not much else. The upgraded chalets are very nice and I think the plan is to upgrade them all at some point. The dining room/ bar is well furnished and you eat overlooking the river and tundra. The food was fantastic- several courses for breakfast and dinner with local delicacies of moose, reindeer, king crab and halibut to name a few, as well as salmon sashimi on tap if you deep hook one.

I had fantastic, slightly unseasonal rains for the first 2 days which produced a lovely rise on the Belousiha. Because of this I mainly fished the top beats from the canyon down and had brilliant sport all week- chances in most pools, fishing almost exclusively a hitched sunray in the faster water and bomber in the slower water. I averaged 5 fish a day, with plenty more missed chances, and was lucky to catch the largest fish caught that year on this river- a 90cm (16lb) coloured hen fish. I also caught some very fresh smaller fish- mostly in the 5-10lb bracket. Surprisingly only 2 grilse. Hitched sunrays around an inch long were the best, and the grey and white bombers were their favourite flavour. The guides were keen on using wet flies- cascades and Frances mostly, but the sport was so good from the surface that I rarely bothered. I took a switch rod but ended up using just a 10’ #7 single which was perfect.

The rains also meant that they had to release more water from the hydro and I had a magical few days on the Voronya. The top beats of Power Pool and top island accounted for all my fish, including one magic afternoon where I had x3 20lb fish from the same spot at the top of Power Pool, all on a weighted red Frances. Another rod did also have a larger 105cm fish from further down, but we did also both blank on the Voronya in the lower water. There is no way of knowing when they will release the water, and too much can make it unfishable and too little seems to push them into deeper pools and make them less aggressive. In all I landed 6 fish in 4 days on there, all between 15-25lbs, plus one grilse. They recommend Scandi lines, but I fished either a Rio AFS shooting head in low water or an intermediate skagit in the higher water and caught on both. Make sure you have a variety of sink tips and different weight flies.

All in all, a fantastic experience and £ per fish far cheaper than I have ever spent in Scotland. Don’t be without Smidge/ mosi spray as with no wind they can be a pest, but I understand there are far more in June and July. A buff/ neckerchief was also very useful for the mosquitos as wearing a full head net is never fun and wasn’t necessary with a buff and some spray. Also the boulders are quite greasy so make sure you have good wading studs- most of mine were missing! I will definitely be back out there soon.

The Three Rivers programme which runs over the final three weeks of the season on the Atlantic Salmon Reserve covers the Kharlovka, Litza and Rynda. Sixteen anglers with a huge amount of water to cover. The first of the Three Rivers weeks is preceded by a 2 week rest period when the camp is closed with no eyes on the river ...