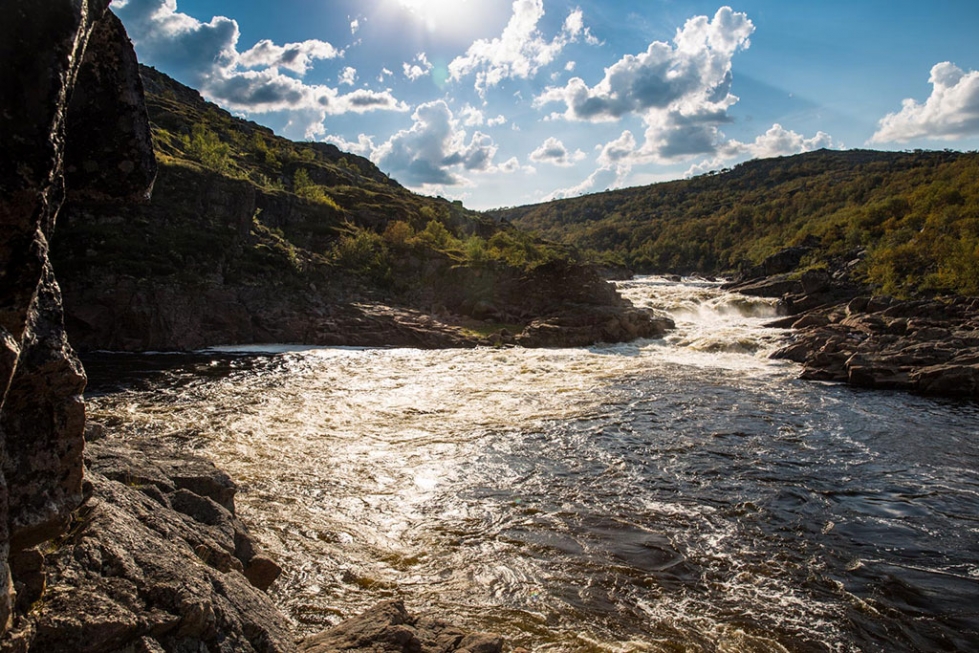 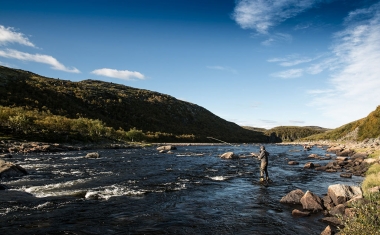 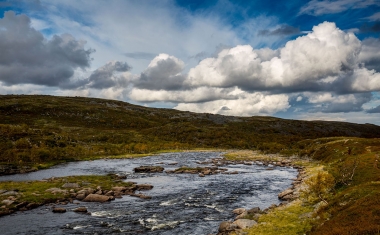 The Three Rivers programme which runs over the final three weeks of the season on the Atlantic Salmon Reserve covers the Kharlovka, Litza and Rynda. Sixteen anglers with a huge amount of water to cover. The first of the Three Rivers weeks is preceded by a 2 week rest period when the camp is closed with no eyes on the river conditions!

At the close of the summer season the rivers had been literally cooked over 5 very hot weeks. Amazingly catch figures remained stable and reasonable throughout but the rivers needed water. The Kharlovka gauge read -9cm when the lodge shut up for the 2 week break on 6 August. I can only assume that the combined hopes and rain dances of one form or another were not just heard but delivered all at once. In the week prior to our arrival there must have been beyond torrential rain as the river had not just risen but stood at an incredible 42cm. To put it in perspective that was 3 cm lower than the opening day of the season on 28 May!

This was all exciting stuff! Our team of mainly regulars on the week for the most part had never seen the rivers this high. The guides were apprehensive. Not one person had ever experience river conditions remotely similar to this at this stage of the season. The water temperature remained higher than one would expected given the recent rainfall dropping from 16C to 12 C over the week. Instead of the standard tried and tested tactics for fishing at this time of the season we were all going into it completely blind. Hitched flies vs Tungsten Tubes. Floating lines vs Fast sink.

As is so often the case it ended up with different anglers finding their own keys to unravel the unexpected fishing conditions. Andy on his first visit to the ASR chocked up some good results using a Scandi Tungsten Sunray. The single hook Golden Killer And V Fish Fly fished straight or hitched were both effective throughout the week. Rickard had unfailing confidence in his double hook Cascade regardless of his guide Dima’s encouragement to use something else…anything else! With his 40lb Salmon from Secret Pool on the Litza from a few years ago (view the video) it was always going to be hard to argue with that.

The Sunray Shadow was never far from the list of favourites and Alex discovered to good effect just how exciting it can be to strip it fast across a pool, even if this meant him arriving at breakfast on a couple of occasions with a ‘bead on’ and a few fish under his belt. With the unseasonably fast water I have to concur that it was a very effective way of getting a reaction from a fly cast into the calmer water over a very fast near-stream current. Even if a lot of fish did not stick when fished in this way it helps find the fish like no other method.

An unusually large number of fish were lost during the week. A high proportion of fish were hooked on the nose as opposed to turning on the fly with the resulting firm hook set in the corner of the scissors. When salmon do so they seem to be taking a more inquisitive approach to taking a fly rather than a whole-hearted grab. Despite the number of fish that came off the enquires and fights, even if short-lived kept everyone on their toes.

As always there was a collection of notable events. The video below encapsulates the former.

Although big salmon were seen and some hooked for the most part they were elusive. Possibly reinforcing quite how arbitrary salmon fishing can be, not necessarily rewarding experience the two largest fish of the week, salmon of 23lbs were both personal bests and went to not just newcomers to the ASR but also the less experienced salmon fishers amongst the group. Congratulations to Harry and Pavel for showing us how to do it.

Special mention must go to both JD and Lewis. Not only did they both bring an entourage of son and son in law’s respectively but being in their 70’s they really showed that age need not be a barrier to coming to the ASR. The unusually high water conditions did not make for the easiest wading and it has to be said that Lewis was definitely grateful for guide Gesha's company when they both went for a swim on the final afternoon. Commendation should also be given to son in law Harry for showing solidarity and taking a plunge a little later!

There were a few other notable events. The encounter with a bear by Krister and Dima whilst literally on Litza Flat Stone was particularly exciting. Guide Dima urged the overly inquisitive bear on its way with a couple of mini-flares. The experience was more thrilling than frightening although maybe easier for Rickard and myself to say with the width of the Litza between myself and the action! Krister then excelled on the fishing front playing first a grilse on a Cascade at Litza Falls which was then joined by a 7-8lb Brown Trout which took a Chernobyl Ant on the dropper. Two in one!!

As the week progressed the fishing got progressively better. The rivers dropped and the water temperature cooled. The salmon were definitely spread far and wide and would showed in places that I would never expect to be fishing at this time of the season. Our tally of 124 fish for the week was quite significantly down on the 158 of 2015 and 174 of 2014 for the same week. Given the huge change in river conditions all said and done this was not unduly surprising or disappointing. I cannot think of many rivers that could still produce admirable quantities of action having tripled in volume. More difficult than normal fishing conditions are always testing on anglers and guides alike but the high-spirited evenings and effusive and 100% complimentary remarks about the guides and lodge staff alike as always made for a fabulous week.

Follow the full season reports on the Atlantic Salmon Reserve Report section. If you are interested in fishing the ASR please get in touch [email protected] Tel +44 (0)77 11 519 857