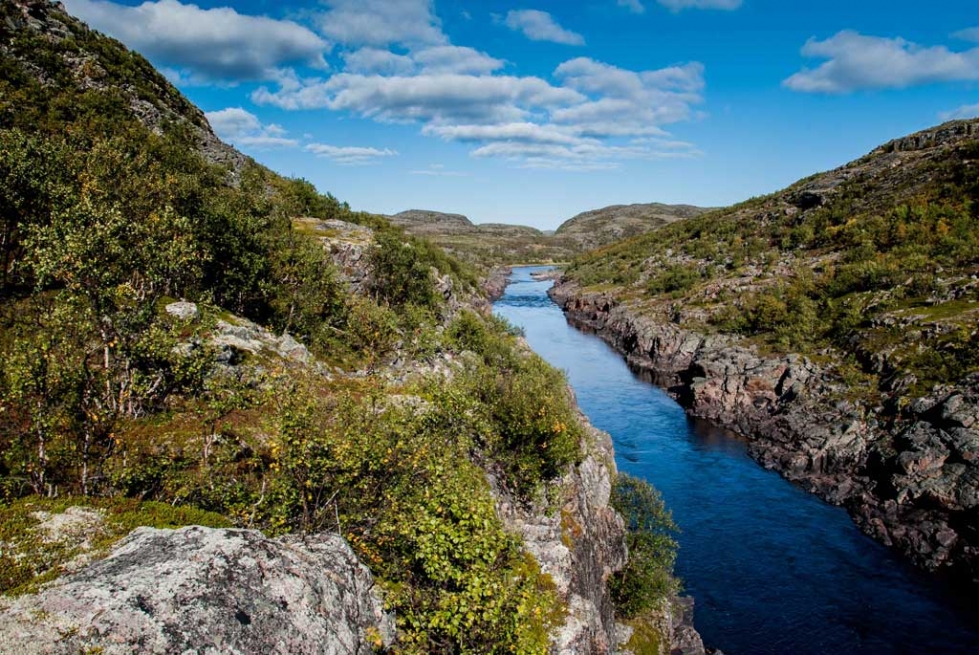 Week 36, the second of the 3 Three Rivers week’s and the penultimate week of the 2013 season, was almost a very enjoyable but steady week’s fishing on the Atlantic Salmon Reserve. Six national flags were flying from the Kharlovka lodge to welcome the team of 14 rods who arrived at camp; 4 from the USA, 4 Spain, 2 Switzerland, 2 Great Britain, 1 Germany and 1 Russia.

Fishing conditions were ok however with no more rainfall since the previous week the rivers continued to gradually drop from -11 to -15cm on the Kharlovka Gauge. The first taste of autumn weather was in the air and whilst there were no frosts, on a couple of days the air temperature was low enough to encourage woolly hats or gloves. Just to emphasise the unpredictability of the weather, on Friday strong warm winds from the South meant that we were back to light shirts!

The tundra is now a remarkable pastel of jaded green, burnt orange and yellows smattered by copious quantities of red and blue berries. In odd moments off guides and camp staff seem to have amassed extravagant quantities of mushrooms and berries, all of which will be taken home and distributed at the end of the season. The sun now sits lower in the sky throughout the day and whilst the energetic, prior to breakfast, happily made use of the Home Pool, by the end of evening festivities, whether that be at 10 or 12 o clock, navigation outside of the immediate camp confines required the help of the stars if not a torch.

So what takes a relatively non-descript week (by ASR standards) to one that was within a veritable hairs breadth of becoming a week that would be etched into the record books. In short a salmon of a size that many would disbelieve and that no salmon fishermen would ever forget! This was the week that a doctor from Oregon, Charlie Chambers, came within 1 cm and a few hundred grams of breaking the standing ASR record of a 47 ½ lb. salmon, caught by Chris Tarrant on the Eastern Litza in 2007.

Charlie, who, whilst wildly acknowledged by his friends as being an extremely accomplished fisherman, an excellent caster and general bon viveur had never fished for Atlantic Salmon before. Although partnered by Ian throughout the week, on Thursday 5th September he had the middle beat of the Eastern Litza all to himself as well as the undivided attention of ‘Big Alex’. Alex is typical of the calibre of legendary ASR guides; specifically he is known not just for his size, but his quietly spoken manner, ability to both position and recover anglers from unreachable parts of the river and above all, with twenty three hard-earned years of knowledge guiding on the Northern rivers, his experience is second to none.

By mid-afternoon they had reached Spawning Pool, a wide rambling pool that although close to 100M across in the middle, is interspersed by huge boulders and is really a medley of small streams and pockets. Ever vigilant Alex reported to Charlie that he had seen a big fish roll a short distance above from where they were now fishing and that it would be worth re-tracing their steps to cover it. Although Charlie considered this to be something of a wild goose-chase, he was not going to let his preconceptions of ‘not-catching a fish just because it had been spotted’ cloud Alex’s guidance.

At this point it is worth noting that Charlie was fishing with a single-handed 7-weight rod and despite having fished for most of the week with 12lb test (which for most anglers on the ASR would be considered nothing short of big-fish suicide) was encouraged by Alex to use some fresh but still dangerously ‘Litza light’15lb leader. Again, following Alex’s guidance that he should try a big and different fly, Charlie selected and received approval for a non-particular and unnamed purple and blue marabou Steelhead fly.

Most salmon anglers will at some stage have followed a similar timeline of events leading to dashed hopes but on this occasion, bang on cue, the line drew tight to an unseen and apparently inanimate object. Were it not for the ‘big fish’ expectation, a fierce jerk might well have been applied to remove a seemingly snagged fly, but instead, Charlie pulled tighter and tighter onto the object until finally it yielded the first grudging indication that it was a fish.

The following sequence of events felt like minutes merged to hours and simultaneously vice versa. With each nerve-rattling shake and knock the terrifying drawn out process of give and take ensued. This grudge period went on for what felt like an eternity but even with the rod cranked double the 7-weight seemed to make little discernible impact on the fish or its intentions. Finally the great salmon woke up to the fact that it was hooked and with a unsettling turn of speed…departed! Exiting a chute between huge rocks it then tore off line downstream and into the centre section of the expansive pool, a boulder minefield offering barely more than five metres of unbroken water between obstructions.

Wrapped, entwined, ensnared, unreachable; the salmon now had Charlie’s line strung out like Spaghetti across the pool. Alex, experienced and unperturbed and with little regard for his own wellbeing, waded far out into the pool, indifferent to water current or depth. Seizing an opportunistic moment to an unwary opponent, apparently safe mid river, he thrust the net under the fish as it held station amidst the boulders. As the net was partially lifted the enormity of the event unfolded as the spade like tail protruded a foot or so proud of the normally expansive net.

The fish tipped the scales at 21.5 kg. or 47.3 lbs. Potential inconsistencies in scale readings aside it was 1cm shorter than the accurately measured 47 1/2 lb salmon caught by Chris Tarrant in 2007, although just how close it had come to topping this was not known until records had been scrutinised back at the Kharlovka lodge. A few photographs were taken and then the great cock salmon was slipped back into the water where unperturbed it headed back to the depths.

Charlie with his 47lb monster from Litza Spawning pool

99.99(9)% of salmon anglers could fish all their lives and never encounter a salmon of this size. With just five days of Atlantic Salmon fishing under his belt it could be considered unfair that this prize went to Charlie, regardless of his extensive experience with steelhead. For his part, Charlie, with gratitude, restraint and humility simply maintained that Alex did all the work. Whether right or wrong our most magnanimous congratulations to Charlie for such an amazing fish. To say that the exultations and celebrations were echoed amongst the entire lodge, long after the release, would be an understatement!

The tally for the week was 113 salmon, of which we must include mention of two other very fine fresh fish of 25lbs and 22lbs, respectively caught by ASR novices Jean-Claude and Harvey. In total there were 8 personal best fish amongst the group and although the water levels still precluded any significant run of fresh fish it will be a week that will not be forgotten.

Host for the week - WhereWiseMenFish 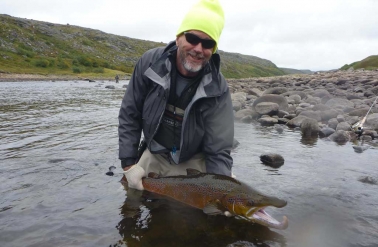 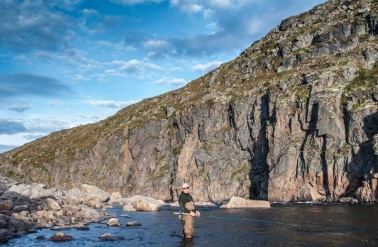 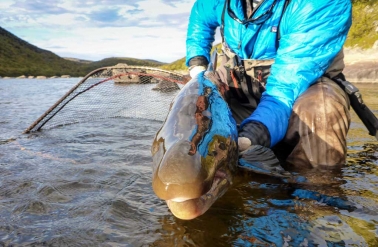 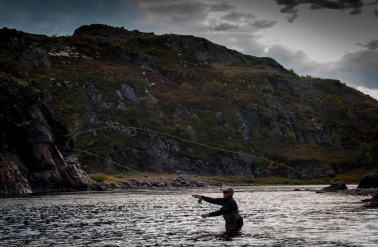 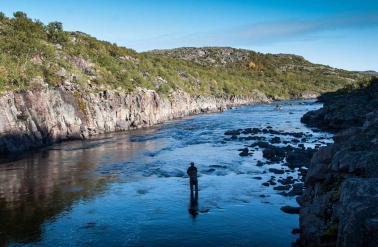 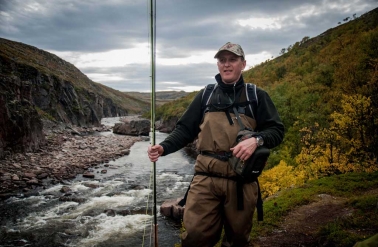 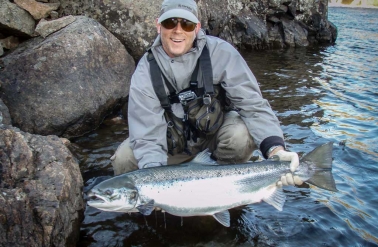 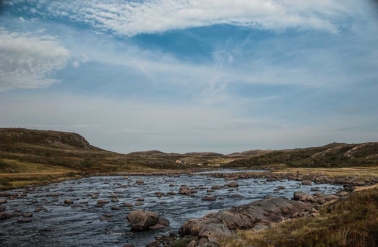 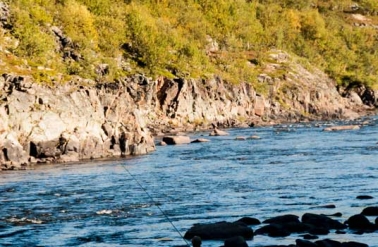 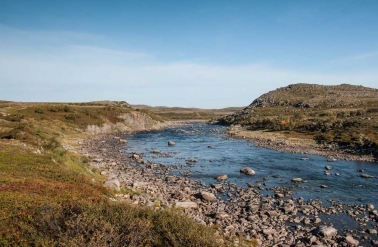 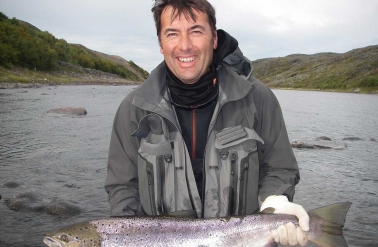 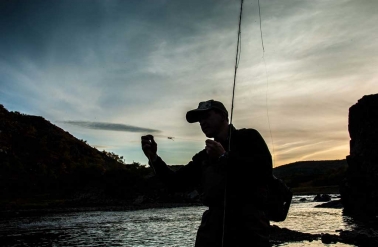 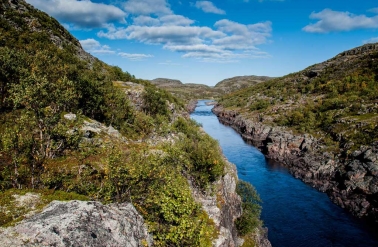 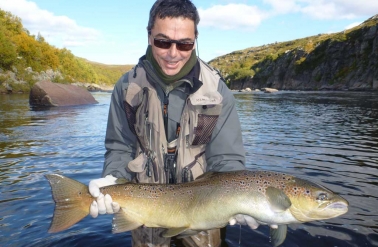 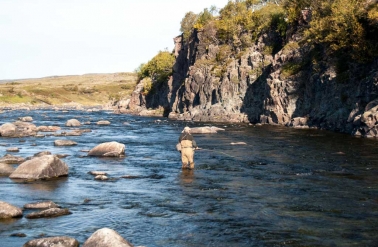 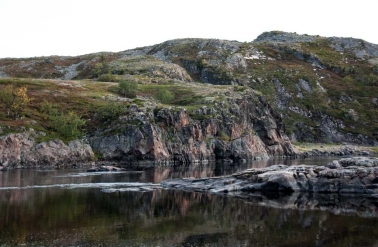 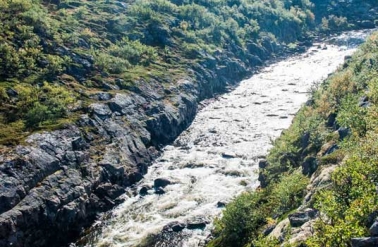 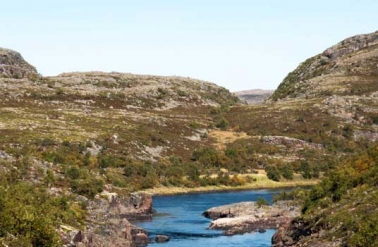 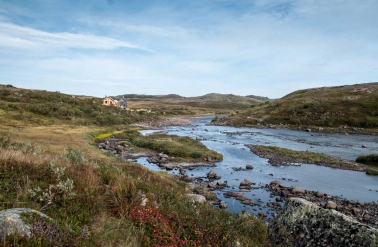 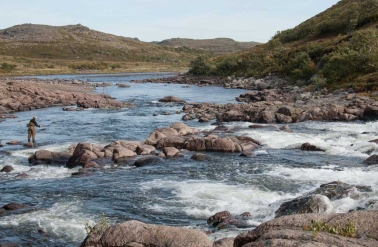