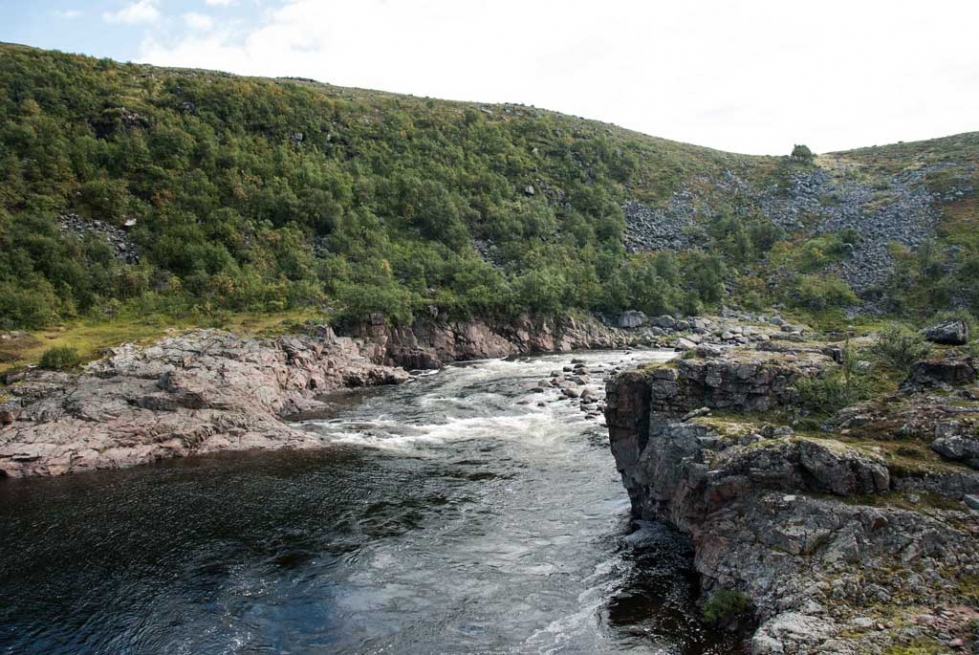 It is simply impossible, when faced with the privilege of travelling to fish three of the world’s finest Atlantic Salmon rivers not to reach a degree of mental turmoil leading up to the event. To wives left behind this may be nothing more than a holiday but to the typical salmon angler this is probably the best chance of catching the ‘big one’.

Anticipation, aspiration, expectation! All fishing trips are a combination of these three thought fundamentals. Achieving the right balance is as important as packing the correct rods, lines, flies, clothing and assorted paraphernalia that makes up the contents of a typical anglers suitcase. Achieve the perfect equilibrium in this equation and you can sit back, enjoy the camaraderie and with luck the fishing gods will deliver.

Expectation - 10%: This, is the mental nemesis to one’s ability to enjoy a fishing week. If you are to find your state of mental karma you need to cleanse your mind of numbers and sizes of what you hope or feel you should catch. Going armed with a head full of catch statistics is a recipe for disaster; find yourself on the wrong side of the equation and a week of mental anguish will follow.

Aspiration – 45%: Ideally this is where I would want to base my hopes for a week’s fishing. The dream of a 20, 30 or 40 pound salmon is what a Three Rivers week may be about. There are absolutely no guarantees but it is the heart and soul of what a fishing holiday to the northern rivers of the Kola Peninsula is all about. A glance at the record 47lb salmon adorning the wall of the Kharlovka lodge is a reminder of that dream; the fulfilment of a salmon fisherman’s pilgrimage.

Anticipation – 45%: It may start starts years before a trip is booked or be heightened following a forensic examination of weather forecasts prior to the trip. Always remember that most variables are beyond your control so accept your fate as it is dealt to you on arrival.

Mentally prepared, flies tied, gadgets and secret weapons organised the team of veterans and soon to be new friends assembled in the Kharlovka lodge for the first of the autumn Three Rivers weeks. The Kharlovka, Litza and Rynda salmon had enjoyed a sabbatical where the rivers were unfished for two weeks, over which time they had enjoyed a very gratefully received rise in the water. The historical river and water temperatures, from the last weeks fishing in early August, stood on the board as a testament to the unusual weather conditions experienced so far this season. Although catches had remained surprisingly good given the long hot season, water temperatures in the 20’s and a record low of -27cm on the Kharlovka gauge told the story of the last week prior to the break. Although still low, water height and temperature was a comparatively respectable -10cm and 12 C respectively which remained more or less constant throughout the week. With sunny spells interspersed by mainly cloudy skies all was set for some good fishing.

Although the fishable stretch of Kharlovka home pool remained diminished in size this did not seem to have a bearing on size or numbers of fish it yielded throughout the week. On the first evening Sam, more used to dealing Sashimi at his restaurant in Thailand, successfully combined abundant enthusiasm along with some rusty casting to land 5 salmon. Similar tales of success set the scene for a very enjoyable six days with three notable fish.

Gary from Northern Ireland, who had religiously followed my Three Rivers Fly recommendations, tying ‘almost’ perfect replicas of all I had suggested, put them to extremely good use throughout the week, but none more so than his PB 30lb salmon from Kharlovka Home Pool alongside a 25lb fish from Litza Flat Stone. Never having played a salmon half as big before it was down to the welcome advice from head of operations Vladimir who came to assist whilst adding support with the simple but sage advice - “Gary – be strong”. 45 minutes earlier when guide Gena had said to him – “Gary, this pool, big fish, use strong nylon!” he had made a quiet prayer to God to deliver something special. As the salmon was released, still shaking, Gary looked skyward and muttered a heaven bound thank you!

Vasily, who had been outdone by his fishing partner the year before who had landed a 33lb Salmon from Litza Falls was determined to make amends or at the least not to be outdone twice in row. With some spectacular catch returns from the Upper Litza beat earlier in the week, when his day arrived it was met with the usual mix of eager anticipation and hope. Although the Falls Pool could only deliver a fresh 7lb fish on this occasion it was Flat Stone that yielded the prize, a superb 31lb salmon to a Golden Killer which was subsequently followed by another salmon of 16lbs.

Vasily with a 31lb salmon at Flat Stone – Litza

The fish of the week however belongs to Eduard Lvov. Separated from his guide he single-handedly hooked, landed, measured, and released a simply outstanding, 34lb sea-liced Osenka salmon, fresh from the sea in Kharlovka Julian’s pool. Although the bulk of the Osenka salmon seemed to be holding back for the first major rise in water this fish was the unquestionable prize of autumn fishing on the Three Rivers.

The tally for the week was an eminently respectable 181 salmon and with no less than three thirty pounders. Krister still did not break the 30lb Atlantic Salmon barrier, and for that matter neither did I, but we will continue to aspire to do so. If, one day, that veritable benchmark is reached, then we can always dream of matching his brother Rikard’s 40lb record from last year. Until that time I hope I and everyone else will continue to enjoy weeks in years to come with more superb company. Add to this little treats such as freshly caught bank-side Sashimi washed down with Soy/Wasabi/Vodka/Beer or even Espresso, courtesy of Krister & Rikard, alongside the all important heated mugs from guide Sasha and you have the perfect recipe for an experience bar none. All that remains is the anticipation as to when one can return. 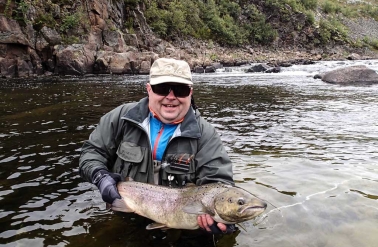 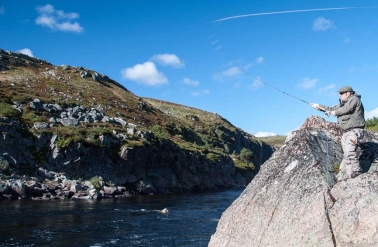 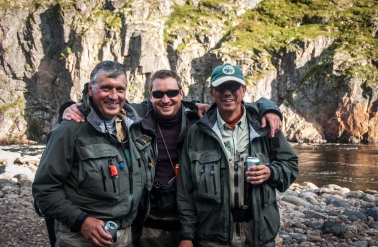 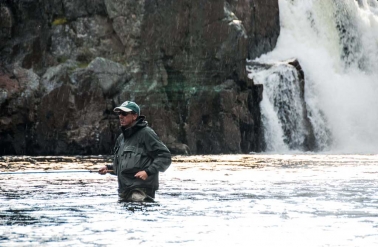 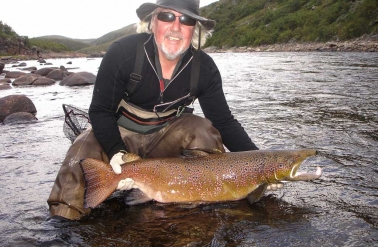 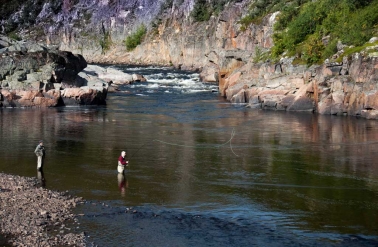 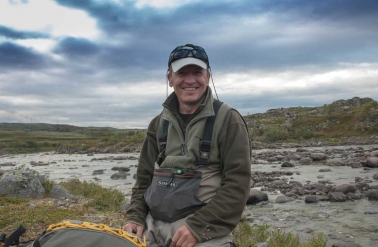 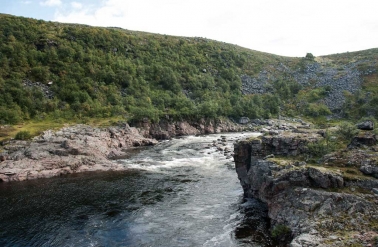 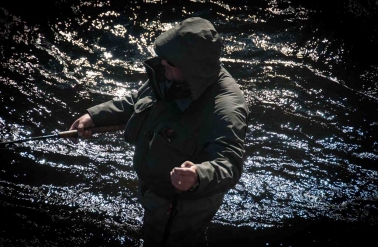 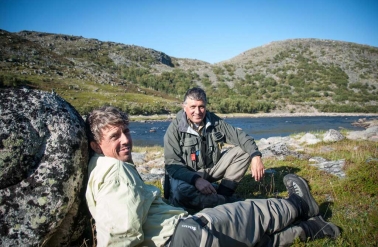 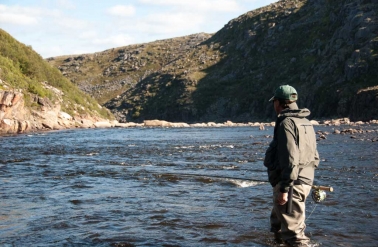 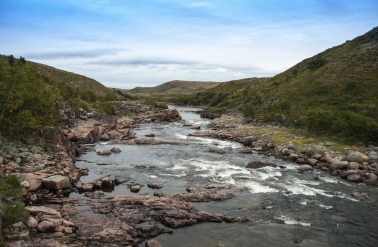 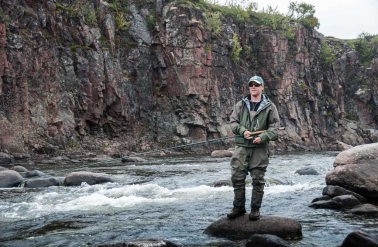 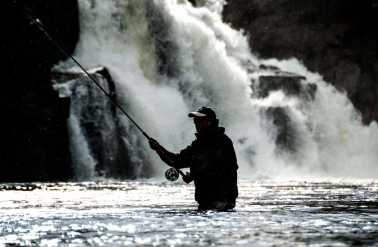 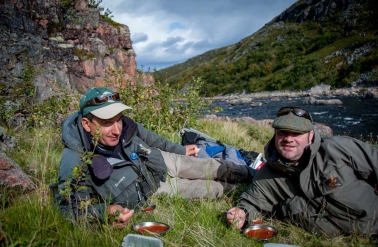 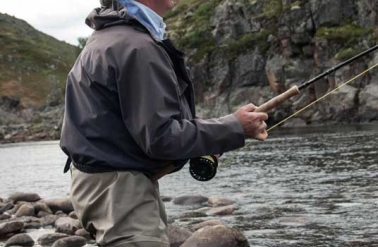 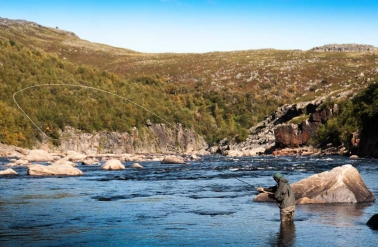 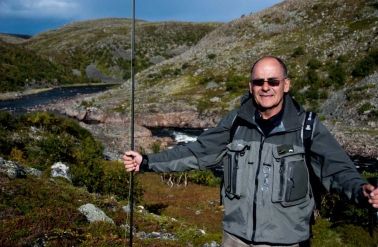 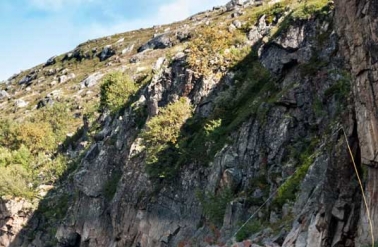 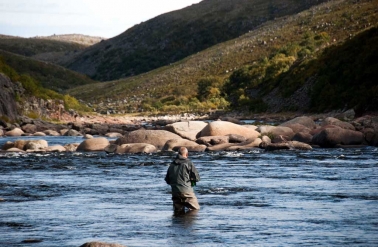