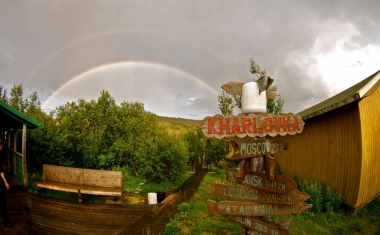 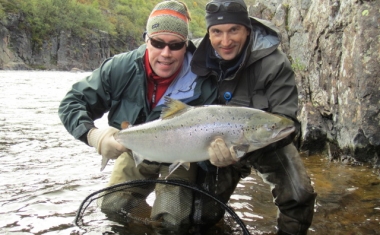 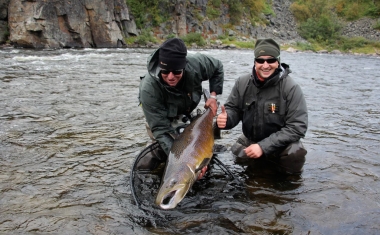 I am sure I am not alone in saying that the quest for big fish is for many fishermen a mix between addiction and obsession. If you fall into either category then a week on the Atlantic Salmon Reserve may well be the drug that drives this lust to new lengths. Concerned…you should be for this week; the first of the ‘Three Rivers’ weeks was spectacular. One 40 pound salmon, two 30 pounders and eight PB’s (Personal Bests) amongst the group of 12 guided anglers along with a final tally of 147 salmon made it a hugely memorable week and one which I can confidently say was enjoyed equally by guests, guides and camp staff in equal measure.

As with the 2011 ‘Three Rivers’ programme all the rivers had been rested for the two previous weeks. Devoid of any angling pressure and with the added bonus of allowing the camp staff a well-deserved break everyone arrived to camp with high expectations and recharged vigour. Where this seasons programme differed from 2011 is that the six pairs of anglers were to be deployed to all the rivers each day, the Kharlovka, Litza and Rynda all fielding four rods / river. In total this provided 28kms of fishable salmon water - too much to be covered on any one day allowing guests the option to fish ‘unfished’ pools each day! Finally, but maybe most importantly heavy rain earlier in August had left the rivers with a good height of water. This gradually dropped by a cm of so each day going from 9 to 3 cm on the Kharlovka gauge over the week. The water temperature remained a steady 10-12 C throughout the week and for the first four days there were overcast skies, a welcome change from the blazing sunshine prevalent throughout much of June and July of this year.

As part of the ‘WhereWiseMenFish’ hosted week I was honoured to be accompanied by a wonderful mix of nationalities from Sweden, USA, Ukraine, Lithuania and Russia. One of the opening comments of the week which struck a note was on looking at the huge Salmon adorning the walls of the Kharlovka Lodge Alexander casually asked Justin McCarthy the lodge manager how many 40 lb Salmon do you expect to catch each season. Justin casually answered "I expect we will have a 40 pounder in the next 10 days". On the face of it a presumptuous comment but in hindsight simply setting the stage for what was to follow!

After two weeks resting the rivers I think Vasily and his wife Marina can be excused for forsaking the Sabbath as a day of rest. That Sunday Vasily caught a grand tally of 7 salmon including his PB of 19lbs from the Upper Litza. However at dinner all eyes, praise and toasts were focused on Marina for her achievements with rod and line on what was her first days fishing - ever! Provided with excellent tuition from Kharlovka head-guide Vasily and armed with the ever-reliable Willy Gunn she caught not just her first salmon but five more which included 2 salmon of 15lb and an absolutely incredible 33 pounder from Litza Falls. If ever there was an introduction to fishing, let alone Atlantic Salmon fishing this must surely count as one of the most amazing days ever.

On the lower Rynda Alexander and his 75 year old father Harold, equipped with their single-handed rods managed 8 salmon between them whilst Alexander Z and Toivo, on what was one of his first outings with a fly rod, caught another 5 fish. In all an impressive 35 fish were caught on the opening day between the Kharlovka, Litza and Rynda and it really set the pace for the whole week.

All three rivers have more than their fair share of cliffs, canyons and rocky backdrops however if anyone doubted the catching ability of those armed with the potentially limited range of a single-handed rod Alexander was quick to dispel any such doubts. His run of form from day 1 continued all week landing a PB 31 lb hen salmon from Flat Stone on the Litza that was deftly returned without so much as troubling it for a photograph as well as a 29lb salmon from Upper Tent Pool, also on the Litza later in the week. If there was one casualty to Alexander’s success, it was to the lodge supply of 1 inch Copper Tube Rogie salmon flies. Each day the list that were reported KIA or MIA (Killed/Missing In Action) mounted and as there success increased so to did the clamour and the scrabble for replacements!

All the beats on the rivers provided consistent action all week. The Lower Rynda fished well with Tolstoi being a favourite and on the lower Kharlovka, Barrel and Rock Pools were the best producers. Floating or sink tips were all that was required and fly choice was by no means restricted to heavy tubes. The red, yellow and orange colours of Cascades, Park Shrimps, Snaeldas and Willie Gunns seemed to be especially effective, fished on doubles as well as light tubes. Bright sunny conditions on Thursday and Friday suggested lighter dressed flies would also work those that did, using hitched Golden Killers and stripped Sunrays, were rewarded with the sort of surface action you might expect during a mid July week.

Gradually dropping water levels since river highs of 1.50m on the gauge during early August meant that the conditions for the fall run of Osenka Salmon (winter run) were not great, the big push of Osenkas will probably be delayed until the first decent autumn rainfall. Some good sized Osenka were spotted jumping at the very mouth of the Kharlovka during a Sea Trout expedition however that did nothing to stop Gardi catching the best fresh fish of the week, a 26 lb salmon from Flat Stone although his fishing partner Noel was not far behind with a PB 19 lb Osenka on the final day. I am proud to say that these achievements, both success and casting prowess were assisted with some casting tuition which left both Gardi and Noel not only understanding the mechanics of Spey casting but able to put lessons learnt into very good practice.

The Upper Litza certainly seemed to be the place for the big fish this week. With enviable catch returns during the early part of the week on Wednesday Krister and Rickard set forth with very high hopes for their favourite pool of all the rivers - Litza Falls. Over the previous 8 years they have been unerringly successful at the Litza Falls, to the extent that despite the strong pedigree of pools below Flat Stone as part of the Upper Litza beat - they have never ventured further downstream instead retracing their steps back to Litza Falls for a second go.

Despite a wholly admirable 25lb salmon for Krister from Flat Stone both Litza Falls and Flat Stone were comparatively ‘dead’. The fateful decision was made to venture into the unknown and head downstream to Secret Pool. Krister was soon converted with two fish including a 19lb salmon at which point he insisted that his brother Rickard be given priority to cover the best water. Whether offered up out of altruism, brotherly love or simply pity the exchange of places are unlikely to be forgotten by either. A fish took hold of Rickard’s fly on almost the first swing and after a dogged scrap where an unseen force was almost lost to the rapids the fight after a heart pumping 20 minutes was triumphantly concluded with guide Sasha somehow squeezing a colossal 40lb cock salmon into the net. A fantastic achievement and a memory which in due course will be enshrined forever in his soon to be commissioned wooden carving!

Finally this report would have to be considered incomplete without mention of Russians Alexey and Alexander. On the final day they managed 5 salmon from Secret Pool with salmon of 24,17,16,15 and 7 lbs. The Secret is definitely out! Off river their antics were equally legendary and can be summed up without further explanation in the pictures below.

As always I feel privileged to have been able to spend another week on the Atlantic Salmon Reserve. I also know that from all those that I have met and spoken with over this season, universally there has been a feeling that the ethos of the Atlantic Salmon Reserve has remained unchanged following the transition of ownership from Peter Power to Vladimir Rybalchenko. The entire operation as a whole has retained the exceptionally high standards whilst the warmth and camaraderie shown between staff and guests remains unchanged. Where change has been introduced it has been for the better with added investment both in infrastructure and in exciting new measures that will hopefully continue to protect and preserve this great slice of fishing wilderness.