Home of some truly monstrous King Salmon amidst breath-taking scenery 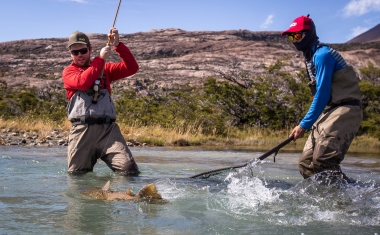 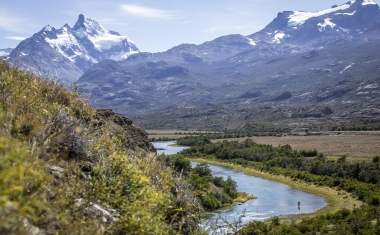 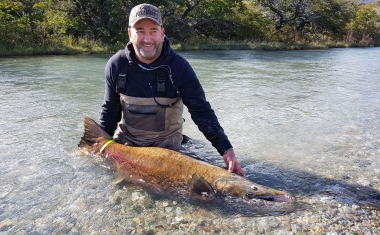 Glacier King is a unique Argentinean experience.   An opportunity to fish in the exquisitely beautiful Los Glaciares National Park, pitted against the King Salmon, the biggest and strongest of all the Salmonid species, and the only known run of Atlantic King Salmon.   Surrounded by breath-taking scenery anglers are accommodated in one of the finest lodges in the region.   Everything about this trip, from the power of the fish, to the overwhelming topography of the region, is spectacular. 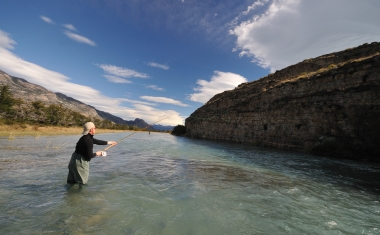 The 8-mile-long Rio Caterina drains from a high plateau lagoon called Lago Anita into Argentina’s largest freshwater lake, Lago Argentino. From the end of December through mid-April, huge numbers of King Salmon run up-river.   Carrying a glacial blue/green tinge, the river is a mesmerising hue when the sun shines and equally seductive from a fisherman’s perspective when not.   The river is deep and powerful in stretches, perfect conditions for King Salmon but at the same time, not so deep as to be inaccessible to fly anglers, all the time allowing for a great swing.

The river offers everything from deep glacial pools to shallow fast running streams, where you can sight cast into the clear shallow water.   It is a manageable size with nice, accessible runs and pools.  The wading is fairly straightforward and you do not require to wade deep.   In many locations the river is narrow, not more than 20 meters wide, although there are also wider deeper sections.  The Kings can be found in the deeper pools as well as in more shallow sections where they are often visible to anglers, allowing for some exciting sight fishing. This is especially true during the latter part of the season, where huge fish can be seen fighting for territory.   Surrounded by historic ice formations, eroded rocky cliffs, and native woods, this is a truly spectacular location.

Fishing for Kings is not like fishing for other anadromous fish.   Kings are of a size and power that is unmatched.  Forget the argument of ‘pound for pound the hardest fighting fish’.   That line has been used so many times with so many species the terminology is Jurassic!    Fishing for Kings is a chance to catch fish on a fly of 30-45lbs, a weight considered normal!   60-70lb fish are typically present in the river all the time.   In 2018 the biggest King landed and measured was estimated at being in the region of 90lbs with another fish of 88lbs landed over the same week.  Nature does not hand out dividends of this nature without expecting a level of perseverance from the angler, but if you put the time in, you should find yourself engaged in a battle that you could only imagine or and all going well, holding a fish in your hands of a size that is beyond anything you might dream of!

Estancia Cristina represents one of the finest and yet most authentic lodging experiences in the region. This lodge offers luxury accommodation embedded within Patagonia’s Glacier National Park. The rooms have a warm and rustic feel, characteristic of the estancia’s history and the lodge’s simple decor serves to complement its imposing natural surroundings. The cuisine is exquisite, crafted from traditional recipes with locally sourced products and coupled with some of the finest wines from across Argentina.   Vegetarian options are available. Spacious rooms provide guests with spectacular views.  All rooms come equipped with a private bathroom.  This estancia also offers a number of non-fishing and adventure tourism activities including off-road excursions, hiking, and horseback riding.

The run of King Salmon in the Caterina usually peaks from February to mid-March, when the sheer number and size of fish can be quite spectacular.  Numbers of fish in the Caterina will peak towards the latter part of the season.   Although chrome fish are not expected, as to reach the Caterina the Kings will already have run the length of the Santa Cruz river and Lago Argentino, most of the fish caught are in good condition and extremely powerful.  As the fish enter the freshwater system their colour will change, although they only really start to adopt their bright red hue in conjunction with an increase in hormones as they prepare to spawn.  During this period anglers often spot fish moving through or standing in deep runs.

The fishing season at Glacier king runs over the Southern Patagonian summer months of February and March. The climate is primarily dry and the areas extremes of cold and heat are moderated by the influence of Lago Argentino (Argentina’s biggest lake). In summer the weather is dry, sunny, cool and windy; the average temperature is around 20 degrees Celsius (68°Fahrenheit), but it can reach up to 30 degrees Celsius during sunny days (86°Fahrenheit) and drop all the way down to 5 ºC (41°F) during the night. Winds are usually moderate but at its extremes reach gusts of over 120 kilometres per hour.  Rainfall is evenly spread out over the year.   In brief however, be prepared for a bit of everything!

Guests should fly to Buenos Aires and from there take a flight from the domestic airport to El Calafate.   They should overnight at El Calafate prior to being collected the following day and travelling by road (1 hr) and then by Ferry (3 hrs) to Estancia Christina.

Collected from your hotel and driven to the ferry terminal, approx. a 1-hour drive. The ferry journey to the Estancia is approx. 3 hours and passes the famous Upsala Glacier, a very popular tourist attraction in itself.

Five full days fishing. Guests can spend the full day fishing or return to the Estancia for lunch should they wish to do so.

Return journey via ferry and road transfer to El Calafate, overnight in a hotel in Calafate 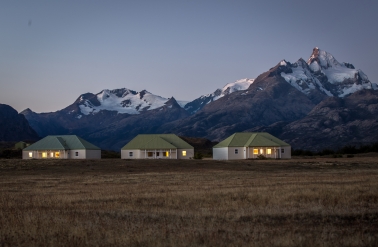 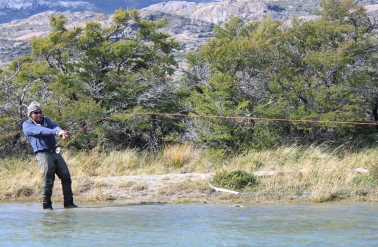 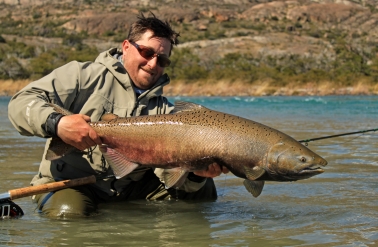 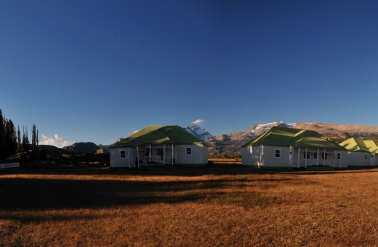 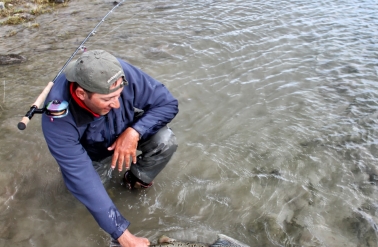 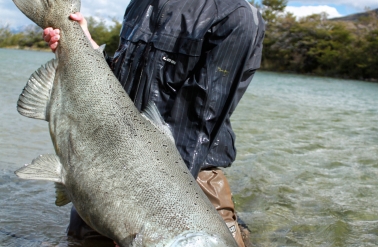 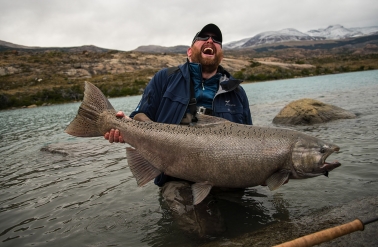 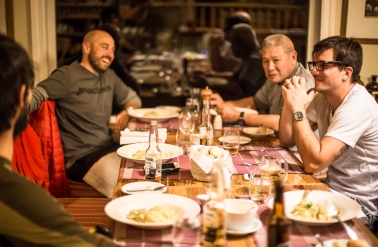 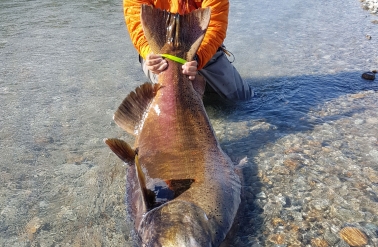 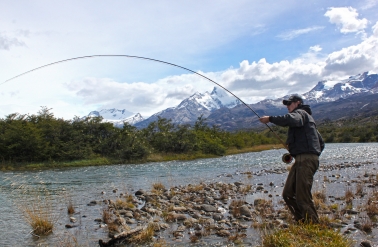 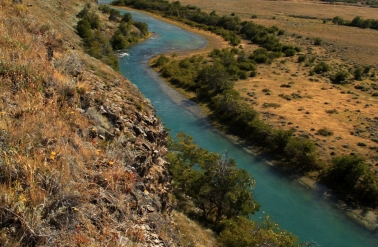 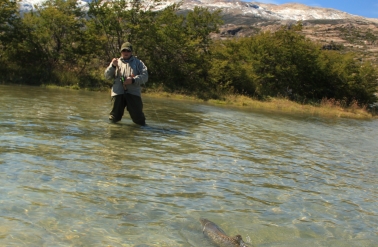 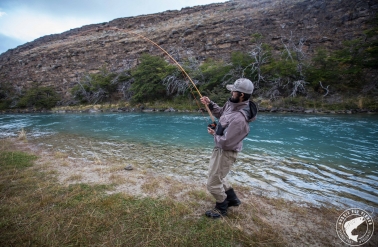 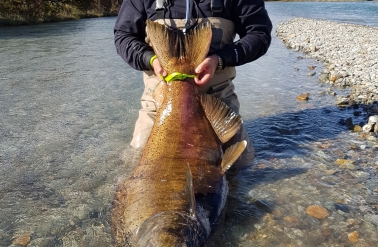 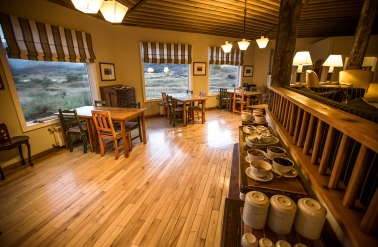 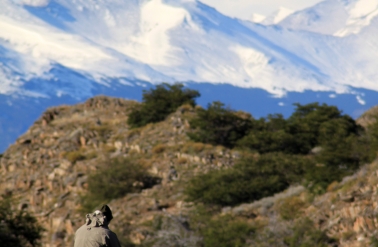 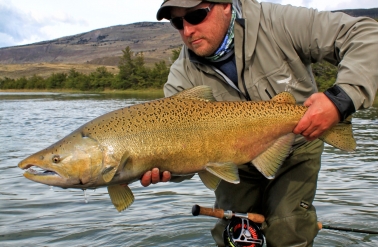 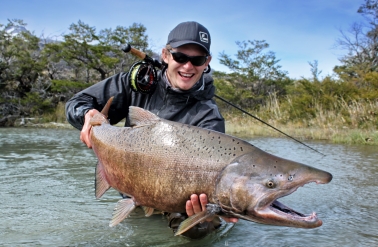 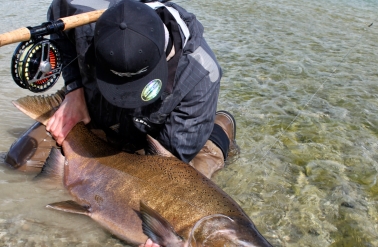 If you would like to know more about the fishing in Argentina, please contact us and we will provide you with more details. For availabilities, prices, pre trip information, booking form etc. please contact:

It’s easy. Just email your name and your recommendation to [email protected]. Please tell us about your trip to Argentina and attach any photographs you would like to share. Please remember that the submitting of your recommendation is considered a release of permission for your testimonial to be used by WhereWiseMenFish for promotional purposes.

If ever there was a time to have an Audible talking book subscription, then I would suggest a trip to Argentina might be a good time to consider it.   There is no getting away from the size of Argentina and the lengthy journeys that are involved.  The domestic flight from Buenos Aires to Southern Patagonia is ...

Pira Lodge in the Ibera Marshlands in Argentina was where “it all started”! It was the first dedicated lodge focused on catching Dorado and was the training ground for both many of the guides and experts who have taken that knowledge to other parts of South America. It was the lodge that put Dorado on the ...

Organising fishing holidays may seem a little sedate compared to the experiences I had gained in almost a decade’s service in Her Majesty’s armed forces of the British army. That said, two or three weeks spent in Argentina every year was just about enough to satisfy at least some of my sense of adventure and the ...

Following on from a week at Jurassic Lake, Lago Strobel with an outlandish tally of 1,100 Trout, in 6 days averaging 6-10lbs in weight Paul and his team of three head to the equally rewarding but infinitely more challenging Rio Gallegos River. ...

"After three amazing weeks fly fishing two of the hottest fishing destinations in southern Argentina, my cup is full. Before these action packed recollections fade into lifelong memories rich on emotion but scant on detail, I am writing to reflect on what we experienced, consolidate new found knowledge and perhaps help others ...

To my mind the Sea Trout fishing in Argentina has no equal. Each year the Rio Grande and Rio Gallegos Rivers entice anglers to travel an unquestionably long distance in the hope of securing what will almost certainly be a personal best fish whilst staying in some of the finest fishing lodges on the planet. As with all fishing, ...

There is little to compare the Sea Trout fishing in both Patagonian Argentina and slightly further South on the Tierra del Fuego. The character and style of the fishing is unique. The average size of the Sea Trout is without equal; typically 7-9lbs and the real monsters are record breakers. The take is often ferocious and they ...

The Sea Trout fishing in Southern Argentina is legendary and for many the Rio Grande epitomizes this. Situated in Tierra del Fuego, (Land of Fire), it is in as remote and isolated an area as you can imagine. Apart from the other fishing lodges there is little in the way of human habitation with sheep being the primary ...

The Sea Trout fishing in Southern Argentina is legendary and for many the Rio Grande epitomizes this. Situated in Tierra del Fuego, (Land of Fire), it is in as remote and isolated an area as you can imagine. However amidst this hauntingly desolate environment is probably the greatest Sea-Trout river on the planet and if further ...

“In the beginning there was Jurassic Lake…and all who came were awe-struck by the wilderness, the size and the numbers of Rainbow Trout. But in 2018, WhereWiseMenFish in conjunction with Solid Adventures, the founding team behind Jurassic Lake, created Eagle Valley Lodge. All who came were in awe!” The Secret Angler-Feb ...

When just one river is not enough to satisfy an anglers thirst for variety, head to Northern Patagonia Lodge. Anglers stay in first-class comfort as well as having the option to fish numerous rivers and lakes, all with very high-quality fishing. For something a little different try going 'unplugged' for a couple of days, ...

FISHING FACT - "The fishing at Jurassic Lake River Camp is quantifiably better than any other camps that have followed in the footsteps of the original camp, established in a unique location at the outlet of the main feeder river to the Lake." ...