Greenland has the world’s lowest population density.   Combine this with countless Fjords with rivers full of fish it is an anglers Eldorado.  Anadromous, sea-run Arctic Char as well as resident Char inhabit the freshwaters along the coastline.   Not all waters along the coastline hold either migratory or resident Char, or even both.   As beautiful as some of the rivers might seem, their relatively young glacial origin has not yet morphed into a nurture ground for Char.   Those rivers that do have some of the most spectacular fishing you can imagine! 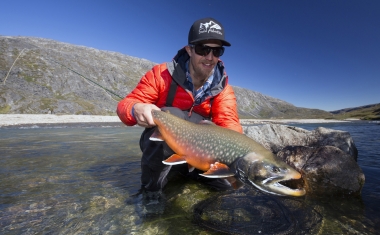 Kangia River in Greenland is a fishing trip that offers a truly unique experience, fishing for sea-run Arctic Char in one of the most pristine and un spoilt environments you could ever wish to visit.   The numbers of Arctic Char that the Kangia hosts, during the summer migration, is a window into understanding why the ...